Creative responses by students from the School of Journalism, Media and Culture (JOMEC) at Cardiff University, commissioned and published as part of our sponsorship partnership with JOMEC.

Songtao Lin, a student from China, visited Tafwyl Festival and St Fagans National Museum of History, reflecting on his own experience and talking to friends with cultural roots from around the world about what Welshness means to them. 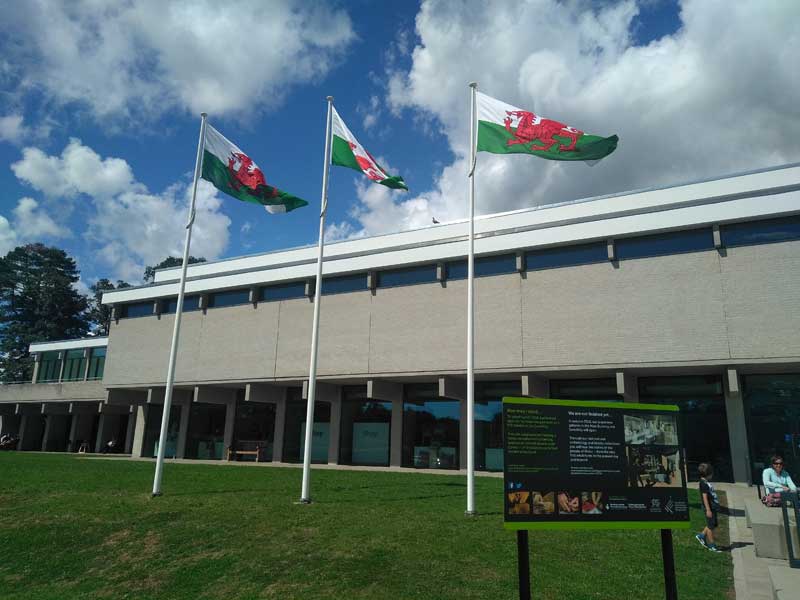 Wales is a small nation within the UK, compared to England and Scotland, and is less urbanised. However, it is still a multicultural society, with communities which have their roots from around the world. Welsh Asian and African communities developed often through immigration after the Second World War, but some, such as the Yemeni community in Cardiff, have been established for much longer than that. In the early 21st century, parts of Wales saw an increased number of immigrants settle from recent EU accession countries such as Poland. Cardiff, Newport, and Swansea are among the most multicultural areas.1

However, the 2011 census showed Wales to be less ethnically diverse than any region of England. 93.2% classed themselves as White British (including Welsh, English, Scottish or Northern Irish), 2.4% as âOther Whiteâ (including Irish), 2.2% as Asian (including Asian British), 1% as âMixedâ, and 0.6% as Black (African, Caribbean, or Black British). The lowest proportion of White British (80.3%) was in Cardiff, with a range of minorities with origins from all over the world.2

In addition to ethnic minorities and people with diverse cultural roots who have been here for generations, many students and people on temporary work visas spend significant time in Wales. So how do ethnic and cultural minorities on the one hand, and international visitors on the other, evaluate their lives spent in Wales? What do they like and dislike about this special place?

Cardiff is a city that feels very multicultural to me. The Tafwyl Festival (a joyful celebration of the Welsh language ) is held between 30th June and 1st July at Cardiff Castle. I met some friends with roots from around the world at the festival and talked to them about it.

Aarav, an Indian who has been in Cardiff for 10 years, was visiting the castle for fun with his wife, children and father. He told me that although he hasn't got much idea about Welsh culture, he already had lots of Welsh friends who felt like a family. âWelsh people seem more friendly than the Englishâ¦ that's the difference I feel the most.â

âIâve just started my Welsh lessons last week and I can say some greetingsâ said Diya, who is of African descent and has moved to Cardiff for two years. âI think more people should speak Welsh, even though Cardiff is an international city. But the bilingual signs on the streets are good.â She made a similar point to Aarav, that in a sense, the Welsh are more friendly than the English.

Jane and her mother were both born in Wales but their roots are in Latin America. The mother said when she was young she did not receive any compulsory Welsh lesson but her daughter did. What surprised me is that Jane did her degree in Welsh-medium language and literature. âWhen I was younger, there were sufficient spaces in Welsh-medium schools, but now people are struggling to get their kids into them. I know of two brothers who have to go to different schools. When we have built enough primary schools we will realise we have not built enough high schools. So children will have to be split up again to go to different schools.â

Jane told me that a persistent and long-standing problem is that English people sometimes look down on the Welsh language and discriminate against people speaking Welsh. This discrimination even happens in Wales.

âWhat interested me recently is the situation where some English people try to change the names of Welsh places to English names. This has led to many voices being raised in protest, saying that it will result in the loss of their culture. Maybe from an English point of view, it is just a name of a lake, but in some parts of Wales, it is only the kind of âheritageâ that remains.â

She also mentioned the issue of Welsh speakers leaving Wales. âPeople in Wales are attracted by bigger cities in England and so on. The Welsh Government is trying to call them back and keep them working here. It has also set up the goal of a million people speaking Welsh by 2050.â

St. Fagans National Museum of History is one of the largest open-air museums in Europe, which brings together a gorgeous combination of Welsh artefacts and buildings from many centuries, and is celebrating its 70th birthday this year. I went there to have a taste and met some interesting people there too.

Lorena, a student from Romania, said âwhen I moved here, I could only compare Cardiff with my small Romanian town where I am from, and Cardiff is just more joyful, people are more relaxed... people appear more organised than what I am used to... and it gives one the impression of safety and stability here. But many of the big problems Romanian society is dealing with today include homelessness and poverty, which are also problems in the UK.â

She had a special feeling about Welsh society. Coming from a former communist country, she said it is still stuck in the past and experiences sharp generational differences, âhere the society is both more diverse and more accepting of different viewsâ. However, âthe freedom to express as you wish and not be concerned with how others perceive it is what I cherish the mostâ. But, she has long felt rather critical about the âinvasionâ of capitalist economies. âThe big brands are blooming in Romania as well, and thus society at large is slowly starting to look a bit like hereâ.

Discussion turned to comparing the media situation in Wales and Romania, although Lorena is not aware of much Welsh media, she was impressed with local media such as the newspaper for the Penarth area, which continues to exist and it makes her happy that this type of journalism retains its value. âWelsh-language television is particularly important for Welsh speakersâ identity and to maintain their language and pass it on to their kids. In Romania, we have a more commercially oriented media. Local stations are overtaken by the big channels and are funded in large part by advertising.â

Although the print newspaper industry is in an existential crisis everywhere, she guessed that fewer people read newspapers in Romania than here. âThe new media is booming. I believe this is where the future lies in each country. But obviously, the Romanian independent media is still in its infancy and much behind that of the UK as a whole.â

Thomas, a student from Belgium, thought the local media, such as WalesOnline, offer good content. However, âin Belgium, we don't have tabloids, which I think is goodâ. He believes that tabloids shouldn't be confused with good journalism.

Iftekhar is a Pakistani who had lived in London for more than 10 years before coming to Wales to study, and made an interesting comment about sport. âIn London, I only witnessed football crowds, and thought people only like football in the UK. When I witnessed streets full of people during rugby matches in Wales, it was surprising for me to learn that many people actually like rugby too.â

Welsh culture is unique in the UK and in the world. Knowing the opinions of people from all different cultures and nations can boost the hope of constructing a better future for Wales. After living in Cardiff for one year, although I cannot say I am familiar with its culture, I felt alive here and fell love with this city. I am looking forward to meeting it again before too long.

Songtao Lin is a masters student at JOMEC

Mental health crises in Wales: How to feel less alone

Aberystwyth: Bubble or Sanctuary? Wales and the Refugee Crisis

Coed Hardd: A modern-day reflection on Gillian Clarke's Cardiff experience in the 1970s

Only Two Pairs of Footprints: a Seafront at Rest