Our Aberystwyth University Student Ambassador Jazmine Codrington gives a personal response to a Planet article celebrating LGBT identityÂ and Wales from 1999 by Mike Parker, and the media outrage which followed. How much have attitudes shifted in the last 18 years?

The year is 2017. The world is no longer black and white. Nor is it viewed predominantly through sepia-coloured lenses worn by those who delve into the âin my dayâ and âwhen I was youngerâ pool of irritating and often irrelevant idioms. Political correctness is taught, expected and, for the most part, accepted.

The world is now a kaleidoscope of colour, of umbrella terms, tales of prevailing love and progress. It has been painted in rainbows, decked in glitter and I, for one, am thankful for this. But if you look closer, past the surface, youâll see that the paint is cracked, the glitter is a distraction tactic. Progress has been made but somehow everything is much less âhuzzah for change!â and more âwell, if we mustâ.

In 1999 Planet magazine featured an article entitled âWales Ì¶ A Gay Nation?â by Mike Parker. Parker wrote from the perspective of a gay man who had moved to Wales from England and who was overjoyed to discover a nation that seemed in many, often intangible, ways to have a âremarkable strain of non-heterosexualityâ running through its history, culture and collective psyche, despite also containing a degree of denial and homophobia. The article was not well received by all. Some were positively horrified at the prospect of homosexuality and their beloved nation being linked in any way. For example, The Mirror (Welsh edition) from June 17 1999 regarded Parkerâs article as a ânational slurâ, interviewing a councillor, archdeacon and a labourer about how outraged they were. I grew up knowing of and accepting the idea of homosexuality, so it was disheartening to be confronted with the idea that something that is such an integral part of so many peopleâs identities was not so long ago found to be so despicable and offensive. 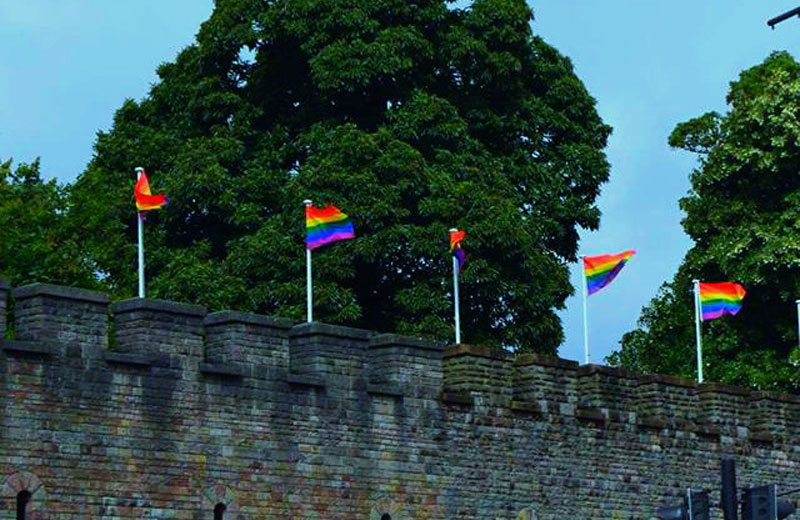 And so I, intrepid student explorer, brought up in England with Welsh roots and now studying in Wales, ventured out to attempt to prove to myself through researching this article that the world has moved on. Furthermore, to prove that that surely, surely, a nation which prides itself on being enlightened and progressive has evolved beyond such primitive homophobia, that it is far less common than in 1999. Surely people are not still fixated on antiquated notions of what love is and is not? Surely even those strong of faith or perspective can respect othersâ existence, can understand that something so pure and harmless cannot be wrong?

To clarify Iâm not so naÃ¯ve as to ever think that eradication of negativity towards LGBT rights will ever be total. While human beings do not exist in a state of stasis, we do have a tendency to refuse change, to cling on like fleshy barnacles to the last vestiges of medieval morality. Perhaps that is why change is so gradual and so shallow. Because we as a species are so enamoured with the past that we glorify it and skim over all the gruesome details.

When I first moved to Wales and started living independently, I was immediately struck by a Big Realisation that being gay and being gay are two very different things. An individual can be out to themselves, or an intimate group of friends, but not publicly, and so is then considered âstraightâ until otherwise stated. (Alternately phrased as âIf someone comes out in a forest and nobody's there to hear them, are they still gay? The short answer is âyesâ.) The idea of heteronormativity makes âcoming outâ necessary, but for some publicising their personal life is not something they particularly enjoy. Once you begin to out yourself, it is a process that you will carry out for the rest of your life. It is correcting the gender when someone asks after a partner. It is the awkward nod of affirmation and a Gallic shrug that says âIâm sorry but this is who I amâ

And while I, as a 20-year-old university student, have never had any negativity around my sexuality and how others perceive it, several of my Welsh friends have experienced this. I was lucky in that I attended a school in England which was unusually proequality. Many of my Welsh friends have told stories of being mocked when growing up, of lying about their sexuality because âthatâs so gayâ became an insult and they just wanted to fit in. They spoke of how teachers would do nothing, how their peers would watch but never intervene. In our Sex Ed classes we spoke briefly about LGBT individuals. We also had peer buddies trained to support everyone regardless of orientation. The phrase âthatâs so gayâ was blacklisted and would earn you a detention or internal exclusion.

And yet, according to research carried out by Stonewall, my experience was not typical for England or Wales. âThe School Reportâ conducted in 2012 and published in January of 2016 revealed that 99% of LGB students in Wales have heard the phrase âthatâs so gayâ, more than 55% have been the victims of bullying and that an astonishing, and extremely worrying, 41% of those who experienced bullying had considered taking their own livesi.

It would be easy to blame the internet, for the fact that children are bullying other children. After all, the thinking goes, thatâs all children do these days Ì¶ they browse the web and become corrupt. And yet a survey of health and social care workers entitled âUnhealthy Attitudesâ carried out in 2015 by YouGov on behalf of Stonewallii showed that 30% of those in health and social care positions in Wales have heard their colleagues talk negatively of homosexuality. So surely itâs not really the children who are at fault.

People are so quick to reassure others that they did not bring their child up to be intolerant, that they arenât bigoted, but the very harsh truth of it all is that if you arenât actively teaching tolerance, you are passively allowing intolerance.

But yet, those same children who were bullied and even those who were themselves bullies are now the peers that I surround myself with. They are now people who, in my experience, will defend my sexuality, support me, and others, despite not knowing much about it other than what they have gleaned from celebrity culture, from the internet, and from TV shows. They are accepting, I think, because that is what society now wants them to be. To be blunt, they care because they must.

I have to admit I feel conflicted: I set out to write this with the aim of coming to a single conclusion, but if I am one hundred percent honest I do not think it is possible to do so. Is Wales a nation partly composed of gay communities? Yes. Are these communities celebrated? Also yes. But when the people who will shape the nationâs future are still not actively taught tolerance, are sheltered from the apparently harsh and controversial topic of love and equality, can we call Wales a Gay Nation? When so many people accept LGBT individuals only as long as their sexuality is not âthrust upon themâ, is that truly acceptance?

I do not think Wales is a Gay Nation. I think it is a country full of shifting opinions, passionate individuals and a lot of potential for equality and freedom: itâs not a Gay Nation but I think it could become one.

For more information about courses at Aberystwyth click here.

Jazmine Codrington is an undergraduate student at Aberystwyth University.