Can Wales become an international bastion of LGBTQ+ rights? 03.09.19

Creative responses by masters students from the School of Journalism, Media and Culture (JOMEC) at Cardiff University, commissioned and published as part of our sponsorship partnership with JOMEC.

Christian Phelps draws on his experience of moving from Wisconsin to Cardiff, his work with urban Welsh LGBTQ+ activism, and interviews with activists in rural Wales to ask whether with its new LGBTQ+-inclusive school curriculum, Wales can become a global model for uplifting LGBTQ+ communities. 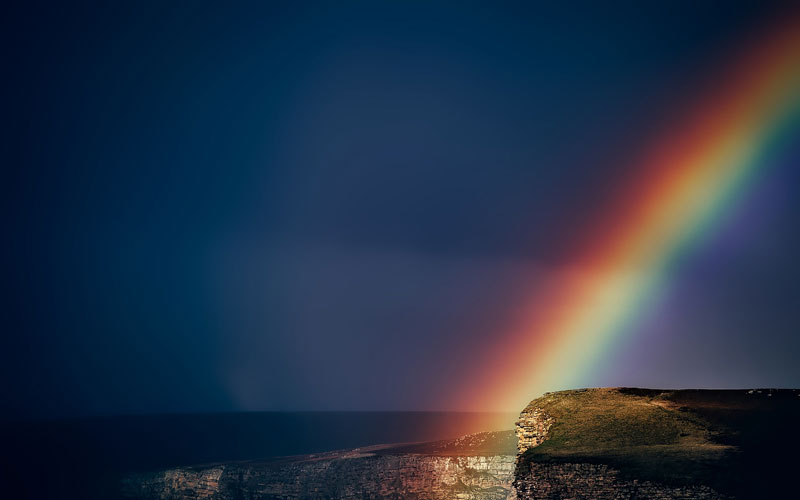 A rainbow in Wales

Home, for me, is northwest Wisconsin, USA, a five-hour drive north from Chicago and another five-hour drive to Canada. I often speak fondly of my hometown, a place I shared with a state university, a confluence of two beautiful rivers, and Grammy-winning electro-folk musician Bon Iver, not to mention 60,000 other people.

Being in Wales has me thinking about home a lot, not because of stark differences, but because their similarities have rekindled feelings of optimism and disappointment that I associate with my own history.

Wisconsin and Wales have two large cities â Milwaukee and Madison, Cardiff and Swansea â with other communities that are less well-known by outsiders . As devolved polities (under very different systems) they both set themselves apart in terms of political values and image. Wisconsin is known for being the first US state to elect an avowed socialist to public office, and Wales for a year-long coalminersâ strike against the Thatcher government. They have more recently received widespread attention for switching long-held party allegiances to hand Donald Trump the 2016 presidential race, and for a majority vote to leave the European Union respectively.

However, thereâs something specific about Wales that has enthralled me as of late. Iâve written about LGBTQ+ movements in Cardiff over the past year, and they always expose me to my favourite people in the city. They also leave me wondering what LGBTQ+ movements look like in the rest of the country.

Cardiff, home to Pride Cymru, the Iris Prize Festival and numerous LGBTQ+ venues, is surely the âqueer capitalâ of Wales. But an investigation into Walesâs upcoming school curriculum overhaul, which seeks to oblige every school to teach LGBTQ+-inclusive topics to students of all ages in every school, has me wondering if Wales can become a global model for uplifting LGBTQ+ communities â not by funnelling them to Cardiff, but by bolstering them everywhere â across Wales and beyond .

Nonetheless, this is a country where the vote for Brexit was 52.5%. A great number of those who voted Leave did so because they were anti-immigration, a stance which often betrayed wider reactionary attitudes towards (e.g.) gender and sexuality. To what extent is Wales really a country that is not only queer-friendly, but welcoming to LGBTQ+ people who come from further afield? .

However, some Welsh communities have a history of constructing some seemingly impossible bridges.

âThe obvious example is the way LGBT campaigns in Wales supported mining communities,â says Kate Rose, who describes herself as a woman, a feminist, and transgender, in that order. Now the co-chair of PRISM, the Welsh Governmentâs LGBTI+ network, Kate is speaking in a personal capacity. âSo youâll find in those mining communities the level of general acceptance for LGBT people is much higher there, even after all these years .â After receiving support from groups like Lesbians and Gays Support the Miners and Lesbians Against Pit Closures, the National Union of Mineworkers started publicly supporting LGBTQ+ campaigns in the mid-1980s .

Many positive foundations were built for a more tolerant Wales against the odds.

When I contacted LGBTQ+ people of all ages living in Wales (both those born in Wales and those who have moved from England), a common response was how problematic their school environment was. Helen Sandler, 52, grew up in Manchester, attended university in London, and now lives in the village of Machynllenth, north of Aberystwyth.

âHonestly, I didnât know I was a lesbian,â she says of her youth. Her schools had never discussed such a possibility, and she only considered this once she was in London.

Twenty years later, the situation was roughly the same. ââGayâ was bad, and that is all we knew growing up,â says Aled Gustafson, a young adult active in Carmarthenshire LGBTQ+ groups. He doesnât remember teachers ever correcting students who used âgayâ as a slur, and says Section 28 prevented them from doing so. âThroughout my experience in school I was bullied,â he says. Section 28, a Thatcher-era law that banned all teachers from discussing homosexuality or gender identity, was in place until 2003. At the same time, the alliances Kate mentions between LGBTQ+ groups and wider society were growing.

I remember my own health education classes as a teenager, from 2006 to 2009. LGBTQ+ issues rarely, if ever, came up. Like Aled, I heard them mostly as slurs. So a duality between repression and solidarity informs Walesâs past â as it does in Wisconsin.

Kate came out to her Carmarthen town and transitioned three years ago, in her 40s. She says she was met with positive responses because of the strong personal connections sheâd built there â her kids attended local schools, she was a recognisable member of her community. She speculates that if she werenât white, British and professionally established, the process could have been gravely different.

Helen echoes her thoughts. Wales and the UK, she says, should hesitate to call themselves bastions of LGBTQ+ progress while its movements fail to include many members of the community. Furthermore, that we should not be complacent when so much oppression exists beyond our borders as well as within them .

âLetâs not forget that while we are able to gather here [in Wales] there are people in other countries who canât, and there are immigrants in this country being persecuted instead of welcomed,â she says.

In Cardiff, organisations like Glitter Cymru have worked specifically to uplift LGBTQ+ BAME people, some of whom are immigrants and asylum-seekers fleeing oppressive laws. Their efforts have begun to percolate out from the capital; meetings are now held in Swansea, and events have taken place in Aberystwyth and other parts of Wales. But the majority of LGBTQ+ visibility in mid-Wales may be of the kind Kate describes, making space for familiar or âpalatableâ members of the community.

Helen says that while some movements gain traction, other issues can fall by the wayside. â[Marriage equality] hasnât helped poor, working-class queers who are of lower incomes than straight people, donât have services to match their identity; and more radical queers who donât want to be normal.â

Members of the community in mid Wales work hard to promote the safety, dignity, and liberation of LGBTQ+ people. Helen and her partner are two of the lead organisers of Aberration, an Aberystwyth-based organisation offering LGBTQ+ social events and promoting local artists. Kate, before moving to Cardiff this spring , was involved in Transgender Mid Wales. Aled is a co-founder of Carmarthen LGBTQ+. All of these groups contribute to the Welsh LGBTQ+ social fabric.

âSupport for these smaller groups needs to grow,â Aled says. âWe donât have and have never had LGBTQ+ venues.â

Slowly, over my own coming out process, I began to meet the other members of LGBTQ+ communities in northwest Wisconsin. I think back on how this happened, given that I didnât know where the lone gay bar was until long after I was old enough to order a drink.

Brexit leaves the future of Wales in a strange and unpredictable position. The country may have voted to leave, but polarised views on the issue have ignited a new fervour for Welsh independence.

âWhen the Brexit result was first announced I was shocked at how the Welsh vote was majority for Brexit,â Aled says. âI am proud of my Welsh identity, and often I have thought that if Brexit is to occur that Wales may benefit from independence and have complete control of how our country is governed.â Helen and Kate express similar shock. Both generations of LGBTQ+ activists I interviewed tell me they hope Wales can crawl its way out of what they see as a cultural and economic mess.

I wonder whether Wales can become a global leader for rural LGBTQ+ movements in an era when internationalism is needed more than ever. Mike Parkerâs book On the Red Hill explores the deep connection LGBTQ+ people like himself have formed with the Welsh countryside. Helen and Kate share a similar experience. Can this story expand to include others? Can the entirety of Wales, urban and rural, be a home for LGBTQ+ people?

But how can a community grow when it doesnât have a venue to call its own? Kate says it may be time to take the lack of gay spaces outside of Cardiff in our stride. Maybe the history of gay bars isnât one to replicate.

âI donât think the venues have always served all parts of the LGBTQ community well,â she says. While gay bars have always been important for gay men who face discrimination in broader society, she says, people of colour, women, transgender people, and people with disabilities have never been fully protected in the same venues. Helen remembers a lesbian bar in London that has since become a gay bar. I remember a venue with the same story in Wisconsinâs capital, Madison.

LGBTQ+ movements change over time, as Kate, Helen, Aled and others know. âI think some people mourn the passing of specific kinds of venues that served parts of our community really well,â Kate says. âBut I think things just change. Itâs not better, itâs not worse, itâs just different. And I think LGBT people, more than anybody else, shouldnât be afraid of difference.â

However Wales changes in the near future will be up to its citizens. But a country with LGBTQ+ immigration activism in Cardiff, and teeming with social groups and activists in its most rural settings, has caught my imagination. If through its new curriculum Wales educates its children on LGBTQ+ inclusion, on the links and intersections between vulnerable groups, and if it builds a society that says LGBTQ+ people are welcome in every corner, people in Wisconsin and beyond will take notice.

Christian Phelps is an MA International Journalism student at JOMEC in Cardiff University.

Retracing Wales: Discover the Shape of a Nation