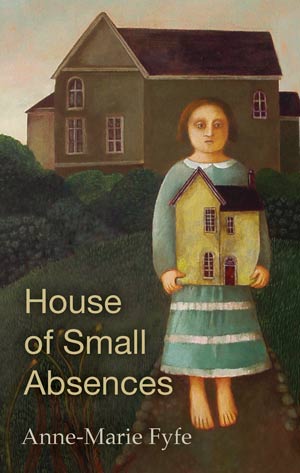 Anne-Marie Fyfeâs fifth collection, House of Small Absences, unfolds a series of partial glimpses, like apertures, onto moments when the secure and the familiar are infused with the unknowable and unpredictable. We are in familiar Fyfian territory: hinterlands, both psychic and geographic, often shadowy and filled with unspecific threat. Like the four walls of a house, the four sections of the collection provide a sense of movement round a many-storyed structure, full of windows which each reveal a small drama of unsettlement. They are peopled with characters â both living and ghostly â who negotiate these quirky intersections between the quotidian and its reversal, and with no map but their own, unstable, perception. The borders between reality and unreality are volatile. Memory may push into the present with a devastating surreality. Consciousness is a tremulous and risky business â what surrounds it even more so. The poems take us from physical height, the upper storeys â and indeed, stories â to the mid-levels and deep foundations. On the way the âhouseâ contracts and expands, can become a skyscraper or a hotel or the cockpit of a light aircraft. Locations, too, are mutable. We travel from Ireland to RavensbrÃ¼ck to Bucharest to Paris to Manhattan with varied stops between. But although the space traversed is vast and nuanced, the same themes and tropes recur, like a dream obsession, taking one guise then another.

Rosalind Hudis is a poet based near Tregaron in West Wales. Her publications include Terra Ignota (Rack Press 2013) and Tilt (Cinnamon Press 2014). She is an editor on The Lampeter Review and a previous holder of a Literature Wales New Writers Bursary.