Dragons are probably the most important mythical symbols in both Chinese and Welsh culture, so what does the dragon mean for the people of these two dragon nations?

This feature is published as part of JOMEC at Cardiff Universityâs partnership with Planet. 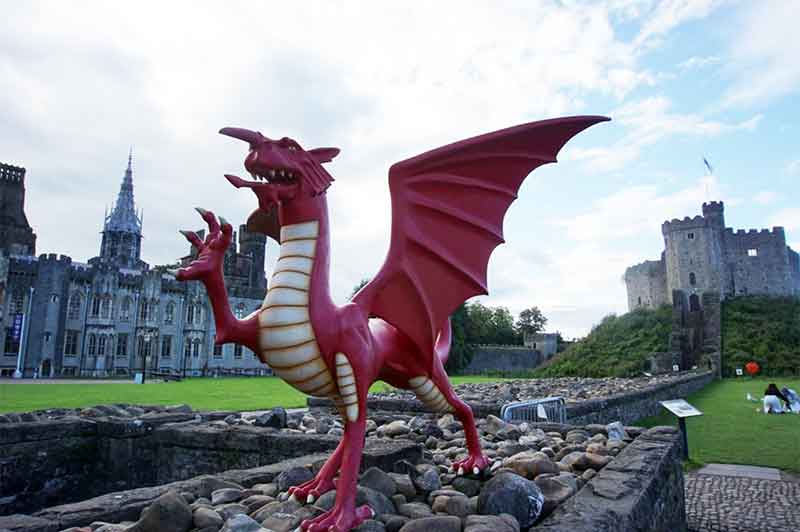 Jo Ashburner knows the Welsh flag better than any other person in Wales.

Because what Jo and her team do every day is make red dragon flags â marking fabric with tailor chalk, drafting the dragon patterns, measuring and cutting the green, white and red fabric, and starting the sewing machine.

Jo, a fifty-five-year-old woman from south Wales, is proud to lead this handmade textile goods manufacturing team called Red Dragon Flagmakers in Swansea â this social enterprise was borne out of her family business established by her father in 1969. Her father would have witnessed the evolution of the red dragon imagery from being a Tudor emblem to an official symbol on the Welsh flag as we know it today, which was created in 1959.

For Jo, the red dragon is more than an image standing proudly with one foot raised on a green and white background, but a symbol of Welsh culture and history. âIdentity is what differentiates everything. Flags are one of the oldest forms of identity, and the dragon imagery of flags is linked in every way to represent the identity of this nationâ, says Jo.

Jo and her team make world-class flags right here in Wales. They don't import flags like other competitors do and don't have a production line system. They sew flags by hand to make sure of the quality, durability and integrity of their product and to show their respect for its ancient dragon imagery. They not only fly the flag for Wales but also ensure the red dragon spans the nation from government buildings to rugby stadiums.

Although red dragon images are commonly seen throughout Wales on badges, bumper stickers and the faces of eager rugby fans at international games, few Welsh people actually know the story behind the symbol. âSadly, in Wales, many of our legends and mythical creatures have been forgotten over time. When I've been going to tourist sites or visiting well-known areas, you rarely find anything about the legends that are associated with that area. I think we should probably do more to reinforce our culture and bring the focus back onto our history,â says C.C.J. Ellis, an illustrator and creator of dragon mythologies in north Wales.

Ellis grew up surrounded by north Wales's dramatic landscapes and numerous tales of dragons and mysterious creatures of this land. The legends, nature and ancient mythologies of Welsh culture influenced her art career greatly. She works mainly with pen, ink and watercolour and occasionally uses computers to bring those stunning dragon images back to the forefront of Welsh culture and introduce them to a new generation. 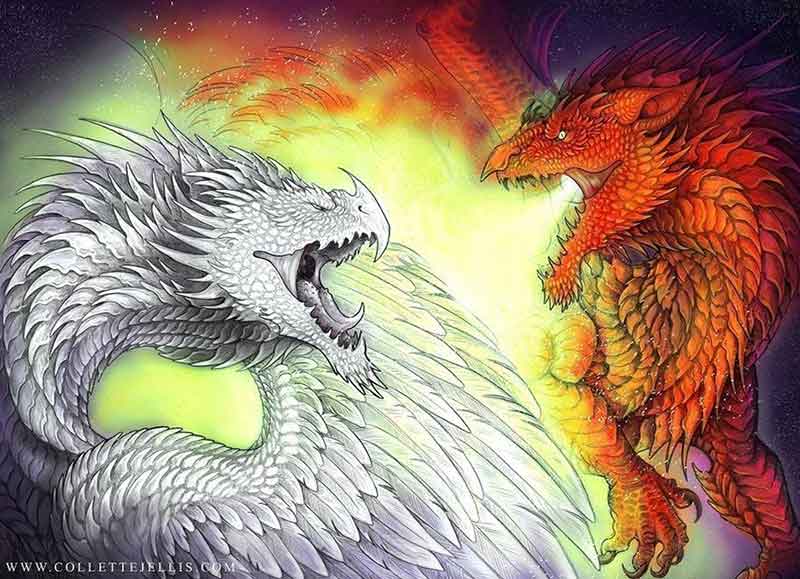 The dragon is the muse for Ellis. She uses colour boldly in her paintings. Readers can see every characteristic of the dragon in her illustration books â horns, scales, claws, down to the smallest detail. The various illustrations are accompanied by different stories, which are more like profiles of each mythical beast. âI didn't realise that people were interested in those stories until I received an overwhelmingly positive response to my books. People all over Wales started sending more legends of mythical beasts from their local areas, which inspired me to expand my work,â says Ellis, having ambitions to share this rich Welsh mythology with the world.

After Ellis achieved her master's degree in Design Communication, she travelled to China, to gain a deeper understanding of the dragon's history there. âThere are differences in appearance between the two nations' dragons. The Welsh dragon usually has two wings, four legs, a shorter body, and can breathe fire. But Chinese dragons usually don't have wings, are more serpentine in form, possess large manes, and normally do not breathe fire,â says Ellis.

Besides the obvious differences in appearance between two nations' dragons, there are also some cultural distinctions. The Chinese dragon artist, Long You, started painting Chinese dragons thirty years ago. He uses traditional Chinese techniques of âink wash paintingâ to create his black-and-white dragons.

After decades of intensive research on dragon images, Long You gained a deep understanding of differences between Eastern and Western dragons. He says: âChinese people saw ourselves as âdescendents of the dragonâ. Dragon images adorn traditional Chinese architecture, doors and roofs as a carving pattern, and are also woven into fabrics for traditional clothes. But in Western culture, dragons are regarded as evil and vicious creatures. Slaying dragons was always considered as a heroic deed.â 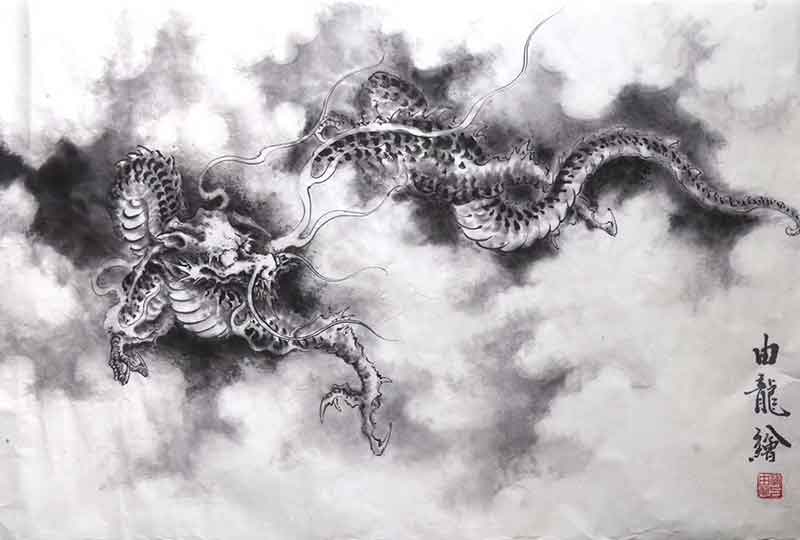 The Chinese dragon, a drawing by Long You Â© Long You

Throughout Western history and literature, dragons are indeed regarded as an icon of cruelty, but for Welsh culture, things might be a little different. According to an article written by Poppy Jacob1, the Welsh word âdraigâ actually doesnât refer to the mythological creature, but rather to a strong âleaderâ, which suggests a fierce warrior or a symbol of the strength of the Welsh people.

In general, there are similarities and differences between these two dragon nations. Over thousands of years, Wales and China have both respected their mythical creature in their own way. Chinese people use dragon imagery in a special performance called the dragon dance as festive celebrations. The dragon dance is performed by a team of experienced dancers who control a long flexible figure of a dragon using poles positioned at orderly intervals along the length of the dragon. The dance team simulates the dragonâs imagined movements in a sinuous and undulating manner.

Lei Su, a forty-year-old man from southwest China, has performed the dragon dance all his life. The dance he performs is called the fire dragon dance, which features a dazzling fire dragon, dozens of meters long, and is played by many people amid fanfare, smoke and exploding fireworks. 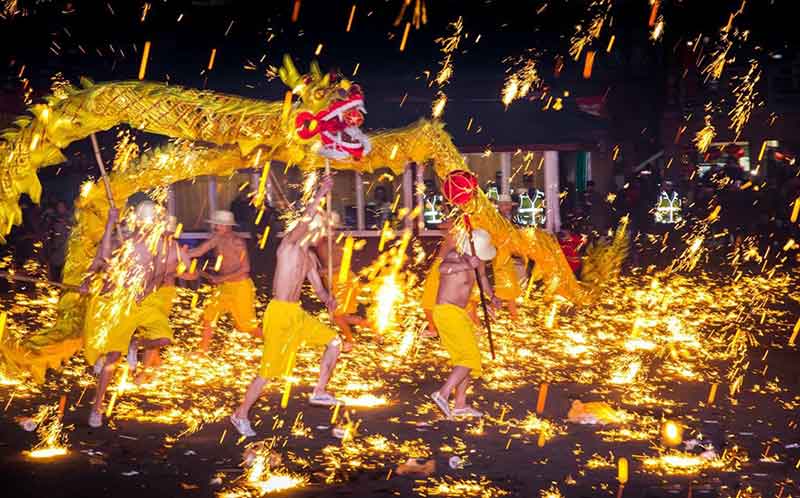 The fire dragon dance has more than 800 years of history and was a traditional celebration for ancient Chinese to beg for peace, a good harvest and prosperity. Nowadays, the fire dragon dance is treated as a folklore experience to promote local tourism. The Chinese government has also now granted it the status of Chinese intangible cultural heritage in order to protect it.

Lei Su's hometown, Huanglongxi Ancient Town, was known as the Town of the Fire Dragon in China. He started learning this dragon dance when he was a little child. The fire dragon dance tests its performers' endurance, flexibility, courage and co-operative ability, and needs diligent practice. âFor me, the dragon is a spirit of endurance and teamwork, and also a totem of courage. The dragon dance is the best way to show our respect to our history and culture,â says Lei Su.

For Lei Su and other cultural inheritors in China, there are always obstacles to them introducing their precious cultural heritage to the new generation. The professional dancing team are now ageing, and young people often have negative attitudes towards the laborious and low-paid dragon-dancing performance. âWe co-operated with local schools to introduce fire dragon dance to young students and will carry out dragon dance training session in the future,â says Lei Su, conveying his hopes for a cultural renaissance for the dance.

Similarly, the dragon story risks being lost in Wales. Dr Evelien Bracke, who ran workshops for local Welsh pupils on âThe image of the dragon and Welsh identityâ a couple years ago, found out that when she asked the children what the story behind the symbol of the red dragon is, none of them could dig deeper than âthe red dragon fought a white dragonâ story. She regards this insufficient knowledge of a deep-rooted symbol and its history as a kind of cultural crisis.

Beyond the similarities and differences between the Chinese dragon and the Welsh dragon, what is hidden behind images of the dragon â cultural crisis, cultural inheritance and change, deserves further discussion and research. 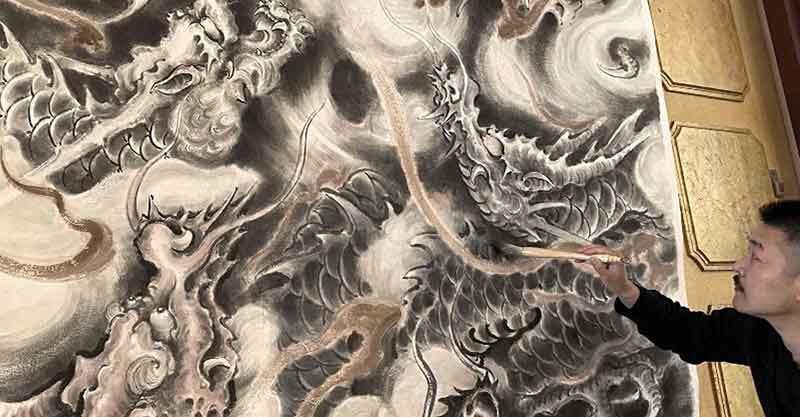