Creative responses by masters students from the School of Journalism, Media and Culture (JOMEC) at Cardiff University, commissioned and published as part of our sponsorship partnership with JOMEC 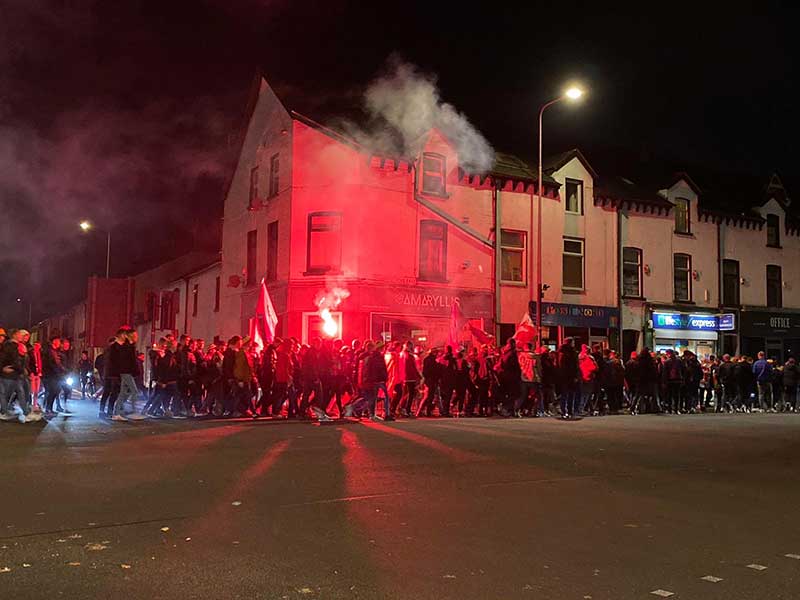 Football fans in Cardiff before the pandemic Â© Barney Lloyd-Wood

Saturday, September 5th 2020. Through the lottery of the cup draw, Newport County played at home against Swansea City. By around 15:45, Newport went into half time with a surprise 2-0 lead, but something else had gripped football fans in the area that afternoon.

Outside the Westgate Hotel in Newport city centre hung a banner from the Welsh Football Fans for Independence group, simply reading âINDEPENDENCE â YES CYMRU CANâ. Football, perhaps like never before in Wales is becoming a sphere for political discussion and showcasing new ideas. The discussion about independence is as prominent in the watering holes and side streets outside the stadiums as it is in the Senedd building

Naturally, this movement has had to tone itself down to avoid risks in a pandemic. The Newport shoppers may not be too blown away by yet another group handing out flyers, whether football fans or not. In happier times, when you could gather en-masse without a care in the world, these same groups were the ones lighting flares down Cardiffâs Womanby Street.

Most notably, last Autumn, fans would gather hours before Wales played at home, the narrow archways near Cardiff Castle would act as a makeshift amphitheatre, heightening the volume of renditions of Calon LÈn and the word âindependenceâ sung to all manner of tunes.

In November of last year, I attended such a demonstration. Here, sport was the great social equaliser, as fans from across the country and who spanned much of the political spectrum gathered. As someone who would define themself as âindy-curiousâ, the demonstration made for a whole new avenue of reflection post-match. After the game, every pint was toasted to the Welsh teamâs triumph against Hungary, reaching the European Championships. But the next day, when the dust settled, my thoughts were that I could pinpoint a clear link between the sporting success of a country and that ability to invoke a sense of national pride. That fighting spirit, that âof course we can manageâ optimism.

Iâm not the first to discuss this phenomenon by any stretch. Dan Evansâ brilliant piece in Planet magazine from 2019 highlighted the role sport plays in reinforcing the independence movement and the heroic narrative fans may feel off the back of their countryâs success, plus its role in fostering internationalism and working-class self-organisation. Welsh Football Fans for Independence are about more than just a mistrust of Team GB, they have created a safe space to canvass opinion, demonstrate and mix football and politics. Such a blend has often been avoided in the past, to prevent drunken arguments or giving a platform for groups like the loathsome far-right Football Lads Alliance.

For many football fans in Wales, watching your country through the years, home or away has meant cautious optimism, too much beer and pricking up your ears as you chat to your new peers in the pub. âWhereâs he from?â, âWhatâs that pin on his bucket hat?â I always found north Walians more extroverted and chattier on these footballing adventures, but maybe it was because it seemed seldom (to me at least, being from Swansea) that south and north ever mixed. âI didnât think they liked us, and now weâre chatting about independence and IPA in the same sentenceâ, Iâd think.

Like any other country, we canât agree on everything. Even with our friendly reputation, Wales fans still argue about both football and politics. However, by a happy coincidence, the tribalism of the internet and the chaos of Brexit have transpired parallel to some of Walesâ greatest footballing achievements, and watching Welsh football does seem to be the place where Iâve seen people mingle together who would never want to otherwise â and would almost certainly clash on Facebook. As we shake off our ârugby nationâ label, success on the football pitch doesnât mean all our fans believe we can go it alone. But for those using football as their stage to project their political desires, it certainly helps.

The polls vary, but it is predicted around 25-33% of people in Wales would vote for independence, given the opportunity for a referendum. Independence seems to be the talk of the nation, with the COVID-19 pandemic plunging us into lockdown and recession, and a growing disparity between laws and regulations in Wales and England.

For the die-hard independence fans, who for many years now would turn up in the wind and drizzle and campaign, initially with a handful of others, this wonât be news. For these people, belief in Wales going it alone was not determined by an upturn of football results. The Welsh Football Fans for Independence group have hinted they will return more fully to the traditional route of leaflet drops, flyers and socially distanced meetings when the regulations allow. Ultimately, of course, their activism can only truly flourish when everyone can sing and shout for their beliefs in the one setting of socially sanctioned public displays of passion: watching your football team.

As for me, personally, to steal a phrase I saw and enjoyed on Twitter, I have gone from being indy-curious to âIndy-letâs-meet-up-for-a-coffeeâ, but would like to see certain conditions in place for further engagement with the issue. Firstly, for such a debate to continue in a relatively amicable atmosphere. This is perhaps easier said than done in the age of Twitter, online outrage and a general mistrust of ambivalence, but the discussion around independence could and should welcome those already on-board, the curious and the sceptics alike. Failure to do so could recreate the heightened anger that has bedevilled the United Kingdom as a whole since the words âreferendumâ and âEuropean Unionâ pushed their way into the public sphere.

However, perhaps more fundamentally, growing calls for a referendum would be easier for all to heed if they came with a backdrop of national pride, not just a âthings canât get much worseâ mentality. We are a small country that punches above our weight, whether you measure that in the 243 billion litres of water we export annually, the mountains and the seas that pull in tourists from around the world, or Chris Coleman leading Wales into the semi-finals of Euro 2016.

Fast-forward to September 2020. No Euro 2020, no magic of Bordeaux, no heroic comeback against Belgium or a narrow defeat to the old English enemy to make the country collectively beat their chests and lift their chins in defiance. But the spirit still lives on. Football still acts as that effective barometer to measure our own strength, but of course in an era of devolution, disaffection with mainstream politics and ongoing pandemic, it is only one barometer among many. 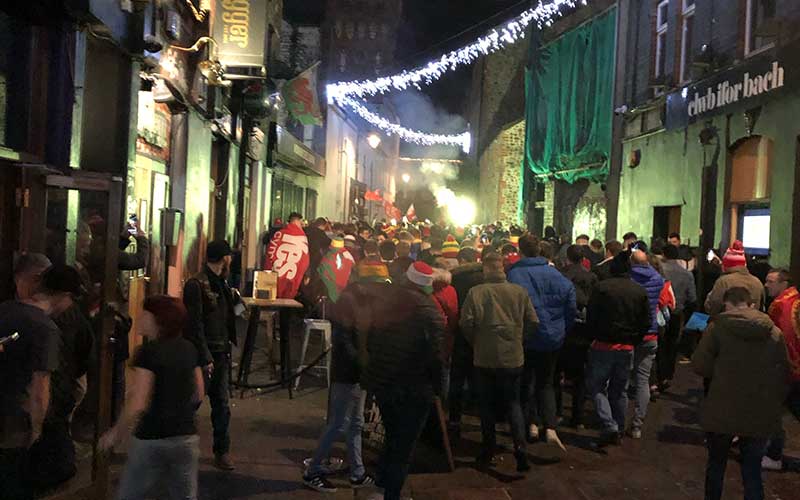 Football fans in Cardiff before the pandemic Â© Barney Lloyd-Wood