Johanna Farkas draws on her experience of being a Hungarian student at Aberystwyth University to reflect on the inequalities between nations, and how an iconic Welsh legend has had an important place in the history of Hungarian nationalism, from the period of Austrian rule until today.

This feature is published as part of Aberystwyth Universityâs Ambassadorship scheme and hosting partnership with Planet. 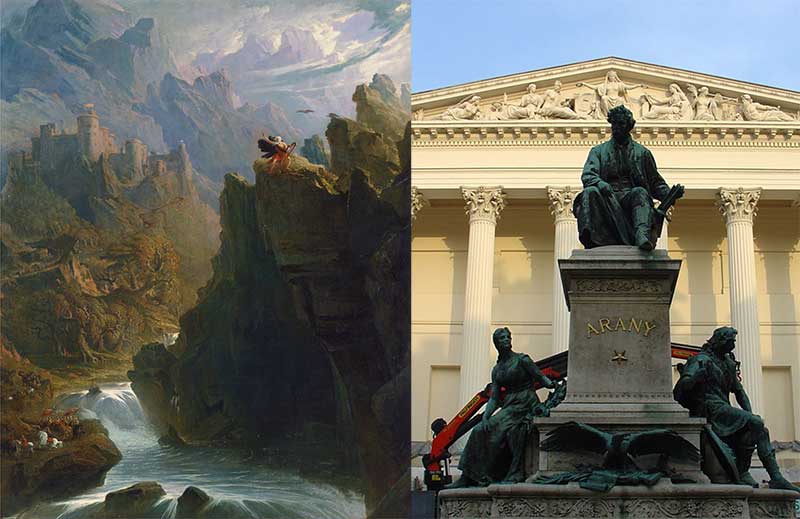 âBritainâ and âEnglandâ are two words often used interchangeably; at least in Hungary where I am from. However, I often hear people from all around the world making the same mistake. Moving to Wales eventually provided me with an insight into how complex and diverse the United Kingdom is, ethnically, culturally and politically. The internal (and in many senses political) phenomenon of English dominance over Great Britain and Northern Ireland is definitely perceived from outside of the UK too, as the interchangeability of âBritainâ and âEnglandâ demonstrates. The three smaller nations of the United Kingdom demanding equality and autonomy has a long history. The cultural, social and political differences between the nations of the UK does not only mean a positive diversity, but also creates clashes in terms of power-relations, political influence and socio-economic issues (which applies especially in the recent case of Brexit). In light of this disproportionate power-relation between England and the other nations, it is no surprise that nationalism plays a significant role on all sides.

Welsh nationalism is cultural in nature.1 Since the 1970s, the urgency to preserve the cultural and historical legacies of Wales have been prioritised, as it continues to be since the start of devolution. One of the most effective tools for this is to support the use of their language, Cymraeg. Language is not only a means of communication, but also a carrier and preserver of cultures. At the same time, it constructs a national identity and a sense of belonging that is essential for the unified and successful advocacy of political, social and economic interests. As late as the early 19th century, 90 per cent of the Welsh population spoke the language, which fell to 51 per cent by the 1900s and then to just 28 per cent by the 1970s.2 With the help of the Welsh Language Society, whose mission is to gain legal rights and social status for the Welsh language,3 it has become possible, among other significant achievements, for more young people to learn and nurture the language in Welsh schools in order to challenge this language decline. The status of the language is for many deeply connected to the status of the people: equal rights for both English and Welsh symbolises the end of the inferiority that England in many ways used to project onto Wales and its people.

It is also very important to acknowledge another culturally significant part of the Welsh legacy: history. This subject is often taught from a biased, rather English point of view, which often neglects to consider a Welsh perspective and does not explore the roots of the people of Cymru, and how certain stories have influenced Welsh national identity through previous centuries. Thus, only a few contemporary Welsh people have ever heard of the legend of the 500 bards of Wales who were sentenced to death by King Edward I because they refused to praise the conquering tyrant, even though it was highly influential in nineteenth-century Wales. Interestingly, this story is more well-known among another small nation, which used to be part of the Habsburg Empire, in similar position as Wales within the UK: Hungary. The poet, JÃ¡nos Arany, chose this story to put into the form of a ballad, metaphorically expressing his national pride and opinion of the Austrian Emperor, Franz Joseph, who victoriously defeated the Hungarian revolution against the rule of Austria in 1848-49. Later, in 1857 when Franz Joseph visited Hungary, the widely admired Arany was asked to write a greeting piece for Franz Joseph, which he refused to do, saying that he had been suffering an illness for many years. A couple of weeks later he wrote this narrative piece of poetry which works with the story of the English annexation and tyrannical rule of Wales in the late 13th century. By using this legend Arany outwitted the censorship of the time, and after the fall of the Habsburg empire in 1918, the poem got its deserved place in the Hungarian canon and school curriculum, and has symbolised national pride and the desire for freedom ever since. Young and old know the whole poem by heart. In 2007, the poem was translated into English by Peter Zollman and donated to the National Library of Wales. In 2012, the famous composer, Karl Jenkins wrote a cantata for the Welsh translation of the poem by Twm Morys and premiered it at the National Eisteddfod of Wales.

The bards of Wales

Edward the King, the English King,
Rode on a dapple grey charger
âI wish to know the worthâ, said he,
âof my Welsh lands over the border

Is the grass rich for sheep and ox,
Are the soil and rivers good?
And are my provinces watered well
By rebel patriotsâ blood?

Although Wales lost the battle, they reaped the moral victory according to the legend. This victory resonated in the defeated nation of Hungary, and thus through this poem Welsh patriotism is an allegorical symbol of Hungarian patriotism even today. Welsh and Hungarian history meet at several points over time, although often not physically and directly, but rather through the trajectories of similar political power-relations, national movements and values. Historic figures and national heroes play a particularly important role in the creation of national identity and sense of community as they not only provide common historic âmemoriesâ, but also demonstrate the greatness of a nation and strengthen national pride. The 500 bards in the legend who gave their lives for the Welsh nation and refused to humiliate themselves, as well as, for instance, the leader of the successful revolts in the early 15th century, Owain GlyndÅµr, feed into a sense of a moral and valuable national image and heritage. Hungarian national remembrance is especially important for the people of Hungary, who proudly look back to their heroes and alleged moral purity throughout history (in a way which often seems arrogant). An interesting fact is that in the writing of Italian patriot Giuseppe Mazziniâs writings, the work of one of the Hungarian national heroes, Lajos Kossuth, was read by a Welsh nationalist, and Kossuthâs thoughts were utilised to a degree by the Welsh movement of the time.4 Another element of the Hungarian national awakening, similarly to the Welsh, is the significance of language in terms of its function in preserving culture. âThe Hungarian proverb âA nyelvÃ©ben Ã©l a nemzetâ (âThe nation lives in its languageâ), expresses the fact that the Hungarian language is the now prominent feature of modern Hungarian nationalism.â5 All official and other institutional systems operated in German, which changed only after the compromise between Hungary and Austria in 1867 (with the birth of the Austro-Hungarian Empire). The uniqueness of the Hungarian and Welsh languages and the struggle for their legal status have had a great impact on both countriesâ national identity, and are still one of the main determinants of their culture and national heritage.

Johanna Farkas is studying for a BA in International Politics and Drama and Theatre at Aberystwyth University.