Lauren Stenning draws on Planetâs Welsh Keywords series and her experience studying in Wales and Catalonia to reflect on the power of language âfluidityâ within bilingual culture, which also inspired her poem âAre you fluent?â.

Creative responses by students from the School of English, Communication and Philosophy (ENCAP) at Cardiff University, commissioned and published as part of our sponsorship partnership with ENCAP. 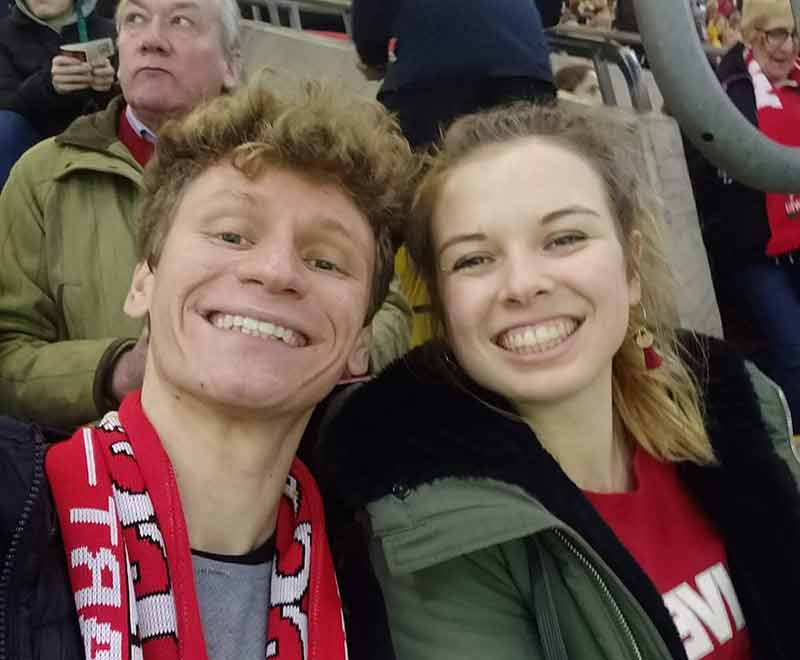 Lauren and her boyfriend Dave at the rugby. Image Â© Lauren Stenning

Where does Welsh Water come from?

But is it really Welsh?

If we think about the water cycle, the Welsh Water youâre drinking could once have been a frozen iceberg in Antarctica. Perhaps it melted and flowed through the Indian Ocean, or evaporated from the Amazon river and condensed into clouds above Brazilâs rainforest. It could have travelled around the world countless times before falling as rain over Wales. So what does this mean for its authentic Welsh identity?

This analogy for language identity was first shared with me during a language advocacy training session and I was reminded of it upon reading Planetâs Welsh Keywords series, where writers discuss the meaning of different words in Welsh, inspired by Raymond Williamsâ book Keywords. It was reflected in the cymysgrywedd (hybridity) of the bilingual culture, the strong feelings expressed by ych-a-fi, which, as a child, Mihangel Morgan was unable to categorically place in one language or another, and the language-identity crisis faced by Catrin Ashton as she became aware of the language mixing present in her community.

Sara Peacockâs discussion of dysgwr (learner) highlighted the societal expectations we place on language learners and speakers and the judgements that accompany these. She notes the emphasis placed on fluency to define oneâs language ability and to draw the distinction between dysgwr and siaradwr (speaker), a distinction which I think is somewhat nonsensical and damaging to Walesâ language-learning culture. FluÃ¯desa (the Catalan translation of âfluencyâ) as a keyword retains the metaphorical nature of âfluencyâ, as its literal meaning translates as âfluidityâ, as with most Latin languages. English on the other hand, has evolved the word âfluencyâ from the Latinate âfluidityâ to be used solely in the context of language learning.

Itâs this fluÃ¯desa thatâs interwoven into bilingual cultures which, as a recent graduate of English Language and Spanish from Cardiff University, who also studied Catalan, allowed me to speak Castilian Spanish in Catalonia and English in Wales, and still feel welcomed into these cultures. Whilst the two scenarios are comparable in their efforts to promote their minority languages, the fluÃ¯desa between Catalan and Castilian is much more apparent, given the similarity between these two Latinate languages in comparison to the contrast between Germanic English and Celtic Welsh. The Catalan languageâs innate link to Castilian can be juxtaposed with the regionâs fight for independence, and as the bilingual language-culture continues to evolve, language mixing and code-switching only becomes more common. If Welsh keywords such as ych-a-fi and cwtch can end up floating in the English-Welsh (bi)linguasphere, surely Castilianâs sister language risks being displaced, as if living in the shadow of a more powerful sibling.

Yet, the language survived a thirty-year repression under the Franco regime, trickling through the underground. The Catalan peopleâs fluÃ¯desa, their ability to seep through the cracks, was crucial to the survival of the language. Some may say that with Cataloniaâs independence movement comes a preference for Catalan monolingualism, but in my experience this isnât the ideology of most independentists. In terms of language, I believe thereâs a craving for fluÃ¯desa among Catalans, a longing for the bilingual culture that was prohibited from flowing for so long. In this sense, achieving fluÃ¯desa is the ultimate defiance against Francoâs homogeneous ideology, a clear motivation for bilingual Catalonia to thrive.

During a speech in 20001, Plaid Cymru politician Cynog Dafis declared a desire to emulate the success of Catalan-language advocacy in Catalonia in Welsh-language advocacy in Wales. With a significantly higher percentage of Catalan speakers in Catalonia than Welsh speakers in Wales both in 2000 and today, the aspiration is understandable, and with the fluÃ¯desa in both places being constantly threatened by the physical displacement of locals by non-Catalan and non-Welsh incomers driving up the property prices, the bilingual and bi-cultural climate seems sufficiently comparable.

Where the two language-scapes differ is both in their history and perhaps in their attitudes to fluÃ¯desa. Significantly, the Welsh language was never actively repressed to the same, violent extent in the modern period. Although this seems like a positive on the surface, it could be argued that the very lived experience of the Catalan language repression is what drove its resurgence after Francoâs death. The Welsh language meanwhile, has been a constant backdrop to Wales, and as with most things in life, this constant presence and accessibility has led to it being taken for granted. Itâs not until something is taken away that we realise its value and develop the internal motivation to regain it.

Another potential barrier to Welsh-language advocacy is the pressure surrounding the association of siaradwr with fluency, as noted by Sara Peacock, as opposed to the Catalan keyword fluÃ¯desa. When faced with the question âAre you a Welsh speaker?â and the binary answers âYesâ or âNoâ, those with Welsh-language fluÃ¯desa (flowing in and out of the language, situated within a spectrum of proficiency) often opt for âNoâ because they define their ability according to this idea of speaking a language fluently, and whether they have attained the status of âspeakerâ. Perhaps itâs time we let go of the fluency stigma and redefine what it means to be fluent. Reconnecting with fluencyâs etymological origin of âfluidityâ via the keyword fluÃ¯desa inspired the poem below.

Immersed in a giant cwtsh of red shirts and beaming daffodils,
stadium filled with teulu, feeling patriotic. Q fuerte esta cultura*.
I grab a video and it flows through social media space, to Switzerland,
Slovenia, Spain. In Barcelona itâs the Bon dia at work, the good music a la festa.
Un chupito* by here, un chupito by there, a cup of tea anywhere, with toast
and burro* is it? I wonder if donkeys like butter... a discussion best saved
for sobremesa* beside a cosy fire with family, feeling like the personification of
cyfieithu. To me, this is fluency.

*Q fuerte esta cultura translates from Spanish as roughly, âwow, this culture is amazingâ. The use of âQâ is a colloquial written form of the word âqueâ.
*Un chupito is Spanish for âa shotâ.
*burro is Italian for âbutterâ, but also means âdonkeyâ in Spanish.
*sobremesa does not have a direct translation from Spanish but refers to the prolonged chatter at the dinner table after a meal. 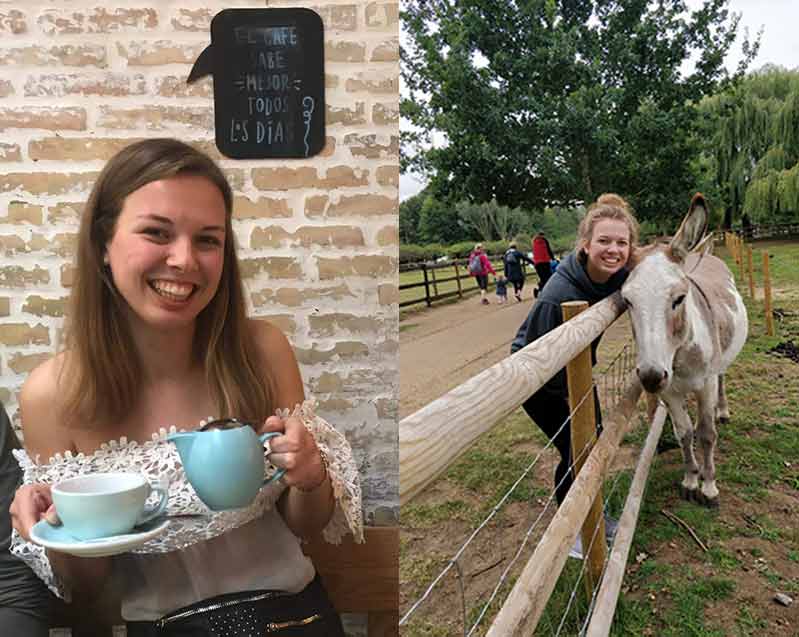 Left: Lauren in Valencia, a Catalan-speaking region of Spain. Right: Lauren and a donkey/burro. Both images courtesy Lauren Stenning.

Lauren Stenning is a recent graduate in English Language and Spanish from Cardiff University. You can find out more about her work at https://www.clippings.me/laurenstenning and on her Instagram profile @laurenslitlog.