Review: What Itâs Like To Be Alive: Selected Poems
From Planet 225

Jane Blank reviews
What Itâs Like To Be Alive: Selected Poems
by Deryn Rees-Jones 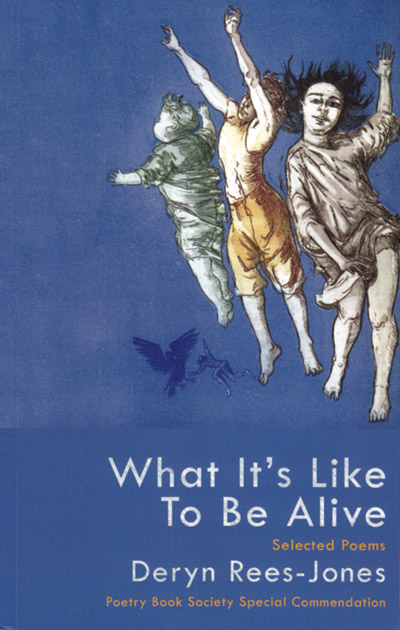 After spending time with a collection that spans decades, the reader forms a greater intimacy with a poet than with a novelist. Ranging through key stages in a poetâs life, a distinct voice emerges speaking directly to the reader, creating a unique and unfiltered intimacy.

In a novel, the writer operates behind the characters; it is their voices that dominate the readerâs relationship with a book. In Tess, it is not Hardy but his heroine that we remember; in Wuthering Heights not Emily but Heathcliff and Catherine we carry in our hearts. It is different, however, if we read Hardyâs or Emily BrontÃ«âs verse. There the dominance of the characters they created in fiction â that filter of personae a novelist sneaks behind â is replaced by a powerful relationship directly between the poet and the reader.

This collection, What Itâs Like to be Alive, is no exception. It is dominated by a first person narrator, often addressing a âyouâ figure, which makes the book intimate, even when the poems are not overtly personal.

Jane Blank is a novelist and poet. Her first collection Naked Playing the Cello was published in 2003. Since then work has appeared in many anthologies including Imagined Greetings: Poetic Engagements with R.S. Thomas; in publications such as The Observer Magazine and Planet and has won prizes, for example from The BrontÃ« Society and Poetry Wales. One of her unpublished poems was recently short-listed for the Bridport Prize.