Congratulations to the winner of our 2020 Young Writersâ Competition! In his winning article, Harry Waveney reflects on the values and democratic structures heâs discovered while engaged in Kurdish solidarity activism; and how this all connects to an old song of friendship.

I wasnât scared when I was surrounded by Turkish soldiers with automatic rifles. Thatâs not a boast. Iâm scared of many things in fact. Like never properly falling in love, not seeing my parents enough before they die, and unknown objects in opaque bodies of water brushing against my skin. For that last one Iâm glad the soldiers didnât let us swim in the Tigris, as our protest had planned.

The essence of fear is solitude but I didnât feel alone as I stood (nervously) under the parasol of a cafÃ© on the bank of one of Mesopotamiaâs greatest rivers in southeast Turkey. Or northern Kurdistan if youâd rather call it that. A great deal of effort â and blood â has been spent on that debate.

The river was to our back and the soldiers, dressed to the nines, to our front. A guy was pacing back and forth, shouting at his men like Mel Gibson in Braveheart. I couldnât understand what he was saying but, much like Mel Gibson in real life, I guessed it wasnât good.

In response to a collection of proud sounding statements, the unit of men, most of them probably too young to grasp their role in history, boomed back what I could only assume was Turkish for âYES SIR!â. I asked Ayla, a local activist who had become our de facto handler due to her Netflix acquired English skills, what else Mel had just said. She relayed: This morning you practiced how to march in formation. This afternoon you will practise firing your weapons. 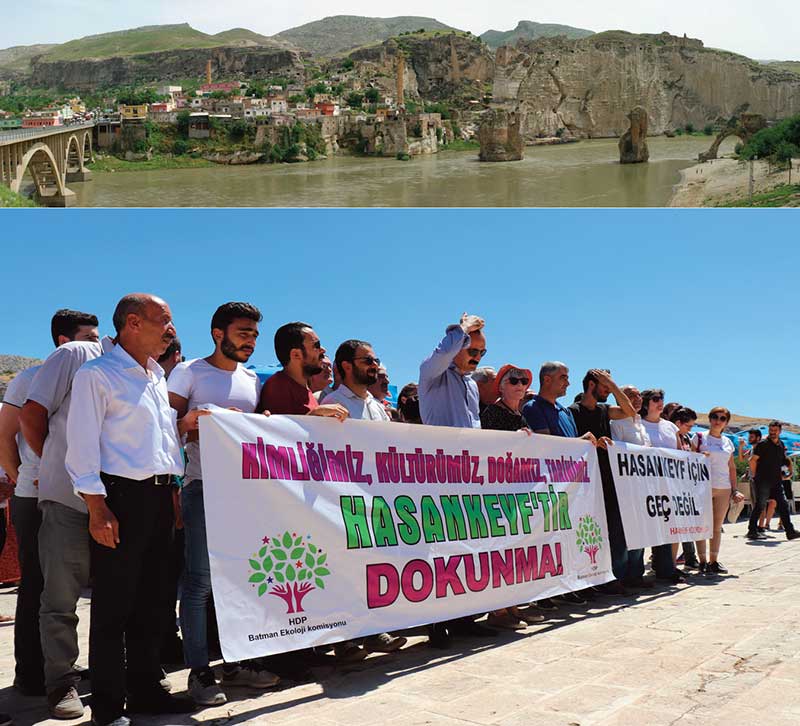 If I had been looking at the soldiersâ faces I may have seen some smirks at what was, admittedly, quite a funny way to threaten to gun down a group of about forty civilians. But I was trying not to look at the soldiers. A Kurdish friend back in Wales had told me to not look the police in the eye for too long in case they decided to take notice of me. I figured the same applied to the army. I occupied my gaze with the view of the village which sat across the Tigris: Hasankeyf. I say sat because, despite being a beautiful 12,000 year-old village when I was there, Hasankeyf is now under water. In April 2020 it was drowned by the filling of the IlÄ±su Dam, the focus of our protest. I have neither lived in Hasankeyf nor the Afon Tryweryn valley but I now hold the vaguest sense of that loss.

On our way to Hasankeyf with friends from the HDP (Peoplesâ Democratic Party) our car was stopped by the police and we were searched. Being the worrier I am, Iâd overpacked for my trip, which prolonged this experience. Between the piercing fear in my chest as I received the softest taste of what it is like to live under an authoritarian regime, I chuckled at the mundanity of a very serious Turkish police officer flicking through my copy of Simon Brooksâ Why Wales Never Was. Whether Brooksâ jarring brand of nationalism should be considered terrorist propaganda is for the Turkish censors to decide.

The first word I ever learned in Kurdish was heval, which means âfriendâ. The Kurds use it like an ageing trade union activist might use comrade except the meaning is both broader and more personal, and less associated with a lost past. Debbie Bookchin writes that heval means,

you are a friend, you are a comrade and you are a coâworker because you are all in the struggle together. And this, in turn, results in âhevaltÃ®â, which traditionally means friendship, but in Rojava comes to embody something more: a mindset of collectivity, of shared purpose.1

I was surrounded by hevals that day in Hasankeyf. I wouldnât phone up anyone from that crowd if I was heartbroken and, to be honest, I can only remember about three of their names. But, in that bizarre moment, I was among friends.

The Scottish poet Robert Burns called Auld Lang Syne âan old song of the olden timesâ. He is probably responsible for the songâs survival, having written it down (and likely adding his own verses) in 1788 after hearing an old man singing it whilst Burns was touring Scotland, cataloguing the Scots culture which was under threat from rising English hegemony. Auld Lang Syne has since been adapted into, among other things, an anti-slavery ballad, a Dutch football chant, and a traditional Japanese song about fireflies. It is the song which erupted in the chamber of the European Parliament on the day the United Kingdom left the European Union and it was sung to will the end of the American Civil War.

Most people reading this will know Auld Lang Syne as that song we all sing on New Yearâs Eve but which few of us know the words to. The title translates literally as old long since, analogous to the English phrase for old timesâ sake. It is a song about remembering those who are no longer here and drinking with those who are. Name a better song for that fleeting moment when we look back on one year and towards another, assessing what was and what is yet to be.

The lyrics read like a conversation between an old pair of friends sat drinking into the wee hours. Over a cup oâ kindness they cast their minds back to dead friends and metaphorical hills and streams and daisies: the simple pleasures of life. At the songâs heart is friendship in its most distilled form. The bonds collected from time spent living side-by-side and camaraderie in the face of the eternal threat of mortality and the hardships it brings. It is a statement of existence for existenceâs sake, sung then, as today, during what must be one of the oldest and most universal human traditions: sharing a drink with kind company.

The second Kurdish word I learned was Ã§ay (pronounced chai), which means tea. Laced with copious amounts of sugar to mask the bitterness, I wolfed the stuff down during Ãmam ÅÃ®Åâs 161-day hunger strike. Myself and a number of other supporters spent what felt like days on end in the Kurdish Community Centre in Newport where Ãmam spent his protracted and painful protest.

My funniest memory of that time comes from a few months into the hunger strike. A number of us had been sat in the community centre for hours writing to every single Member of the Senedd, trying to get them to publicly support Ãmam (we later persuaded them to pass a motion).2 It was March, so it turned dark and miserable early, the streets barely visible through the large shop front style windows of the Kurdish Community Centre, mostly obscured by near life-size posters facing outwards depicting Ãmam, a number counting the days since he had last eaten, and Abdullah Ãcalan, the man for whom Ãmam and thousands of others around the world were on hunger strike. In the caffeine-filled dusk someoneâs stomach groaned. With a pained but genuine smile Ãmam asked, âAre you hungry?â By then he had been surviving off of vitamins and Ã§ay for over one hundred days. 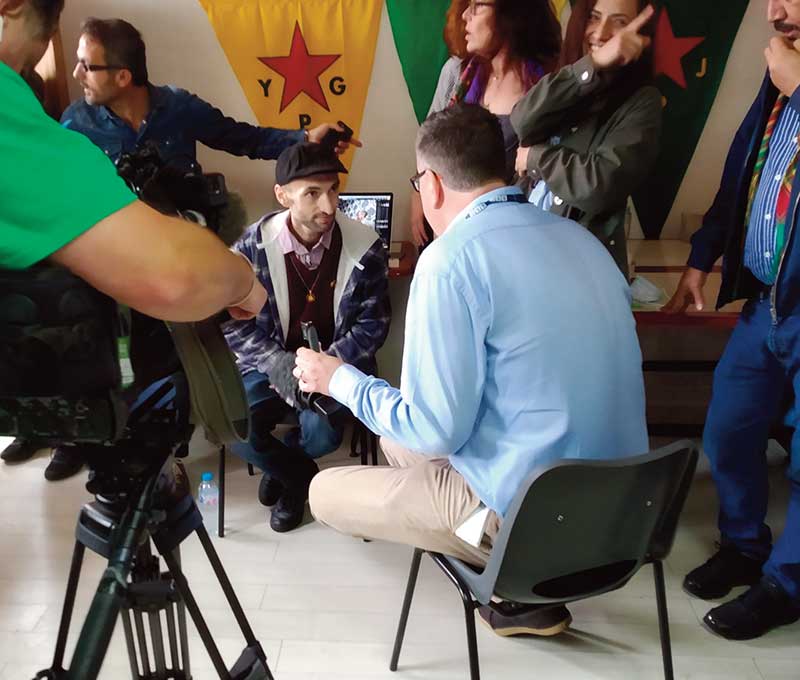 Abdullah Ãcalan, imprisoned since 1999 by Turkey on charges of terrorism and sedition, is viewed by many Kurds as a hero and a leader. Practically, the hunger strikersâ aim was to gain Ãcalan access to his lawyers, access which had and continues to be regularly denied to him on spurious grounds, such as the weather being too bad for the boat to Ä°mralÄ± Island, where he is held, to operate. They also called for the European Unionâs Committee for the Prevention of Torture to investigate conditions in the prison, which they did, although the report was only recently published.3 More poetically, the hunger strikes were a middle finger to the Turkish state. We are still here, they said. A defiant statement in response to Turkeyâs continued repression of the Kurds, from at least the birth of AtatuÌrkâs republic to today.

I had heard of the Rojava revolution in Northeast Syria but, prior to the hunger strikes, it felt as distant as science fiction. I had heard of its multi-ethnic, multi-faith, and radical democracy, with its parallel female structures and ecological economy. But I hadnât seen it.

My next line could go something like, I saw it in Ãmam, but that would be a shallow reading of what happened during those months. Many people in Wales fetishised Ãmam as an individual of extraordinary will but, really, in terms of the Kurdish movement, he is extraordinarily normal. HevaltÃ® is not a lone phenomenon. The people around Ãmam embodied the revolution as much as Ãmam himself. The whole community â Kurds and non-Kurds â mobilised to support him because the protest was theirs.

The revolution of the Kurds and their allies (Arabs, Assyrians, Turkmen, Syriacs, Yezidis, Armenians, and Chechens across Northeast Syria, as well as international volunteers and supporters) is more than a historical event or a single political apparatus. The revolution is so much more than the territorial defeat of the religious fascists ISIS, for which the Syrian Democratic Forces, the autonomous administrationâs official defence force, are responsible.4 It is more even than the regionâs confederated democratic communes, its academies, its âwomenâs housesâ, or its workersâ co-ops. The Rojava revolution is hevaltÃ® generalised, and it is not limited to the borders of Northeast Syria. It exists within those who fight for it, worldwide. It is friendship rendered at the level of politics.

These are not mere romantic affectations but how the Kurds and their allies will often describe their achievements, and the key to their success. Their goal is nothing less than the total transformation of life. The movement even has formalised and semi-formalised processes of constructive criticism for sitting your friend down and saying, hey youâre being a bit of a dick.5 Theorists of the movement speak of a transition from capitalist modernity to democratic modernity not only as a political goal but also a social and individual one.

The Rojava revolution gives ordinary people the freedom and power to say, I am here. The democratic society in Northeast Syria, the territorial expression of the revolution, stands on a knife edge thanks to, among other things, Turkeyâs bombs â made possible by the UKâs arms industry6 â but it stands nonetheless.

This nihilistic tautology and Auld Lang Syneâs haunting nostalgia may go some way towards depicting the macabre pointlessness of the trenches of the First World War. But we could, as the American childrenâs writer Amy Krouse Rosenthal did when she asked audiences to sing these words, reappraise this rendition.

There is a Kurdish phrase which Ãmam repeated regularly during his hunger strike: resistance is life. There is a melancholy to this statement, much like that other Kurdish phrase which states they have no friends but the mountains. But Ãmam never meant that either the Kurds or himself were hopelessly resigned to a bitter life of struggle. He meant that to resist is the essence of life itself. To fight for life is life; a claim to existence itself. I am here. We are here. Why? Because we are here.

The Kurds and their allies can teach us a lot about movement building, democratic procedure, gender equity â even warfare. But these are not their gift to the world. The most precious thing they have offered us is the truth that things can be different, from Wales to Rojava. Weâre still here. With friends old and new. Comrades and hevals. Sharing our cups of kindness, Ã§ay or cwrw. Ryân ni yma o hyd, as the song goes.

Harry Waveney is a writer. Find him on Twitter at @LuxuryCymru.