Spain: an âindivisible homelandâ?
The Catalan Referendum and the Spanish Constitution 02.10.17

Ned Thomas gives an insight into how Spainâs constitution has enabled the oppression of Catalans attempting to hold a referendum on independence, drawing on his experience of working in Spain. However, perhaps the constitution is not as sacrosanct as it seemsâ¦ 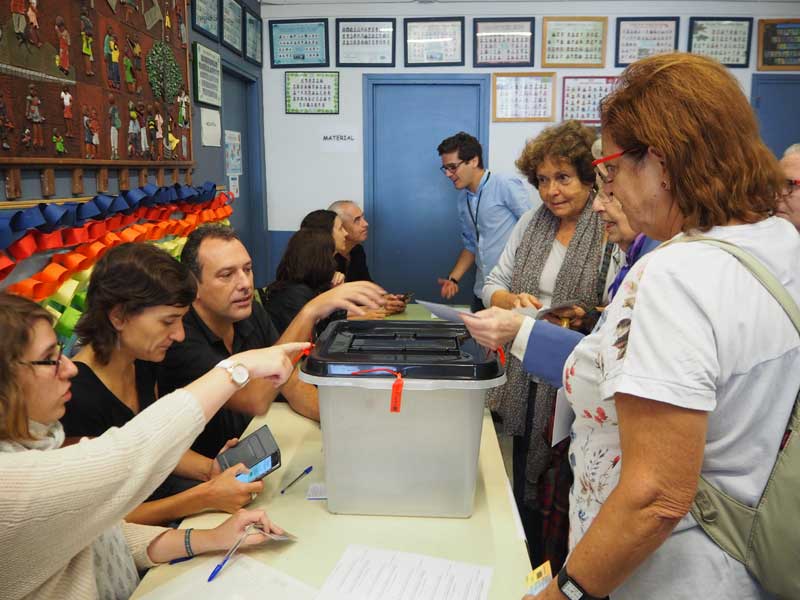 The repressive measures taken by the Spanish state to thwart the October referendum on independence in Catalunya have been the subject of widespread protests, not least here in Wales. This article aims to throw light on one very specific element in the situation â the nature of the Spanish Constitution of 1978 which the Madrid government argues makes the referendum illegal and justifies its actions. But can written constitutions be set in stone? Do they not always reflect the historical circumstances in which they are created? And must they not be subject to revision?

The transition to democracy in Spain, when it arrived after Franco's death in 1975, was a managed transition and the result of negotiation and behind-the-scenes talks between the more reformist members of the Franco government and a wide range of other players, including the military, the monarchy in exile, and importantly, an alliance of parties, movements and individuals on the non-revolutionary left, The Junta Democratica de Espana (JDE). This was put together largely by the efforts of the constitutional lawyer and academic Enrique Tierno Galvan who, when the time came, wrote the preamble to the new constitution. I first knew him when he was professor of constitutional law at the University of Salamanca where I taught in the English department, and I visited him later after Franco's death when he had been elected Socialist mayor of Madrid. He took the view (which prevailed in the opposition to Franco) that given the complete control exercised by the army at the time of transition, any hint of a leftist takeover of the emerging democratic state would simply precipitate forty more years of military rule. The conditions of the time required all kinds of compromise including the recall of the monarchy and other measures which would reassure the military and the outgoing Francoist government. Compromise would also be needed when it came to drafting a constitution.

The new Spanish Constitution of 1978 has many exemplary features and represented a fundamental democratic break with Francoâs unitary, monocultural and dictatorial Spain. Nevertheless, it inevitably reflected the historical context within which it was drafted. Everyone knew that Franco's still unreformed army and Guardia Civil stood ready to intervene. For the army, which was at the time engaged in open war with ETA in the Basque Country, the unity of the Spanish state was sacrosanct. Indeed a coup had been planned for November 1978 to thwart the transition to democracy but was discovered in time. The later notorious attempted coup of February 1981 was triggered largely by events in the Basque Country, but failed, due to the intervention of King Juan Carlos in support of democracy.

When the Spanish Constitution was put to a nationwide referendum in 1978 it was approved by 87.87 per cent of the votes cast on a high turnout of 67.11 per cent (90.46 per cent and 67.91 in Catalonia). It paved the way for the statutes of regional autonomy. These recognised the right of different nationalities and regions within the state to have substantial though differing levels of devolved government within their territories, and guaranteed their right to use their distinctive languages on those territories, though always within the overall framework of Spanish democracy and solidarity between regions. The clauses concerning language in the statutes of autonomy have often led to friction between Madrid and the autonomous governments and have led to some revision of those statutes. Here I confine myself specifically to the features of the historically determined Spanish constitution of 1978 which are used or could be used to justify current or future repressive measures in relation to the Catalan referendum.

Under the new constitution of 1978 Spain became a parliamentary monarchy in which the monarch is the head of state and the prime minister, whose official title is âpresident of the governmentâ, is the head of government. The Parliament is bicameral. Members of the Congress of Deputies are elected through proportional representation by universal suffrage. A second chamber, the Senate, has a more territorial character since it consists of four senators directly elected by each province plus a number indirectly elected through the legislatures of the autonomous communities. The Senate also has a unique function which allows it in exceptional circumstances to suspend the powers of an autonomous regional government should it be held to be acting against the general interest of the Spanish nation. The Senate has never had to exercise this function but this power is very relevant in present circumstances.

Article 2 of the Spanish constitution reads: âThe Constitution is founded on the indissoluble unity of the Spanish nation, the common and indivisible homeland of all Spaniards, and recognises and guarantees the right to autonomy of its constituent nationalities and regions.â âIndissolubleâ and âindivisibleâ are words which insist on ruling out self-determination or possible secession. Since Article 6 notes that the formation and activities of political parties are free âwithin respect for the Constitution and the lawâ it has proved possible at various times and particularly in the Basque Country to portray independentist parties or those claiming the right to self-determination as unconstitutional and therefore illegal.

Furthermore in Article 8 of the Spanish Constitution the armed forces were given the mission of defending the sovereignty and independence of Spain but also âits territorial integrity and constitutional arrangementsâ which many construed as a veiled threat of intervention should secessionist parties ever gain power. Finally, in Article 92 the Spanish Constitution specifically reserved the right to call a referendum (on matters of constitutional importance) to the King acting on a proposal from the President of the Spanish Government. The present referendum called by the democratically elected government of Catalunya has not been called by the King and therefore, it is claimed, cannot be legal. But âTrech gwlad nac arglwyddâ (The Land is mightier than the Lord) goes a Welsh proverb, popularised by Tregaronâs âApostle of Peaceâ Henry Richard. Where does sovereignty lie? With the people, and which people?

Ned Thomas was the founding editor of Planet. He is President of the Mercator Institute at Aberystwyth University and has worked for 30 years in the field of EU linguistic minorities and smaller languages.

Brexit: A moment of Existential Danger

Y Lle Celf: Resources of Resilience for a Fragile World

Sara Rhoslyn Moore reviews Y Lle Celf art exhibition at the 2017 National Eisteddfod and finds common thematic threads of international co-operation in the face of inequality and war; breathing new life into the Eisteddfodâs role as a festival of peace. She highlights the work of artists to watch out for in the future, and offers reflections on how the exhibition could evolve in forthcoming years to best give prominence to 21st-century Welsh visual art.