Photographer and writer Seb Cooke accompanies community activists into the streets of Cardiff one freezing February night to gain an insight into the experiences of homeless people, which have become particularly severe following draconian actions by the authorities and protracted cold weather.
How can grassroots community action help alleviate this injustice?

Itâs a Sunday in February at 8.00pm and the temperature is hovering around one degree Celsius. Taylor, a twenty-year-old woman walking the streets with a sleeping bag over her shoulders, explains how sheâll survive the night: âI get as many blankets together as I can and go into a doorway thatâs closed in.â

Her favourite spot is outside a nearby pub where the heaters sometimes blow warm air into the doorway. This makes it just about habitable on a night like this, but there is no guarantee that the heaters will be on or that someone else wonât have got there first. In the cold depths of a British winter, itâs no exaggeration to say that these things can mean the difference between life and death. Could she stay in a hostel instead? âI try to get inâ she says, âbut sometimes thereâs not enough spaceâ. 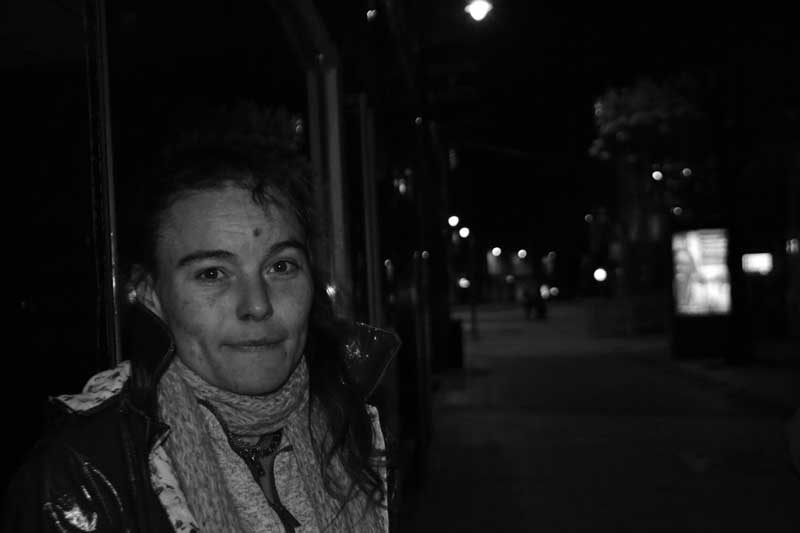 Christina, who says she has been homeless since she was a child and used to sleep under the Motorpoint arena entrance before it was closed off. Â© Seb Cooke

Weâre standing on Cardiffâs central Queen Street and as we talk more people wearing sleeping bags and duvets drift by, some stopping at each bin to comb through the cigarette stubs left in the ash trays on top. Others simply keep moving to stay warm.

This is now a regular scene in Cardiff. Here and across the whole of Wales, homelessness is rising fast.

According to data from the Welsh Government, the number of estimated rough sleepers in Wales has gone up by more than 40% in just two years. When the same study recorded the number of people who were actually seen sleeping on the streets at night Ì¶ rather than an estimate Ì¶ the rise across Wales is far steeper. On this count, homelessness in Wales has risen by a staggering 130% since November 2015. Wrexham is one of the worst affected places. Two years ago, analysts found 17 people sleeping rough over one night. In the most recent study, that number had jumped to 44, a rise of over 150%.

As levels of homelessness have shot up, something else has also happened: the streets have become harder to sleep on. Shutters now adorn several doorways that used to provide shelter; new benches have arm rests every couple of feet that neatly prevent anyone lying down on them and, elsewhere in the UK, spikes have appeared to ensure no-one can occupy the piece of ground they protrude from. It is the latter of these examples that has attracted the most outrage but the other two serve exactly the same purpose: to force homeless people out of town and city centres.

Cardiff is no different, but something else has also been happening to drive homeless people out of the Welsh capital.

On the night that Iâm in town I meet up with Chris and Kelly Newth, a married couple who twice a week find babysitters for their three youngest children so they can come out to visit people sleeping rough and see if they need anything.

âThereâs not as many [homeless] in town now.â Chris tells me, âTheyâve all been given their Section 35s. Theyâve been chucked out or they go to the churches.â

A Section 35 in this context requires a person to leave the city centre for at least 24 hours but often longer. It started in November last year as part of South Wales Policeâs âOperation Purple Ashâ, advertised as a programme to reduce begging, among other things.

Incredibly, this programme has ensured that the official data collected by the Welsh Government shows no yearly increase in the number of rough sleepers in the city despite all other evidence pointing to a steep rise, like elsewhere in Wales.

âWith the Section 35s you gotta be out of town.â Chris says, before explaining that several bridges coming into the centre act as a boundary for the orders. âThey gotta stay over that side of the bridge. If you walk over the bridge coming into town youâre in breach of it. Basically then they arrest you.â

âOperation Purple Ashâ, Chris believes, was deliberately timed to come into force before Christmas âthey want them out of town, they didnât want a bad image for the Christmas shoppersâ.

Even though theyâre not showing up in the statistics, those whoâve been forced out havenât just disappeared; Chris says some are now sleeping in woods outside the city centre or behind garages.

As we make our way around the town centre, we meet two people at the back of M&S. Chris doesnât recognise them and unlike the other people weâve met, they have no sleeping bags or blankets. The temperature is now officially freezing. Kelly pours them some coffee from the flask while Chris zips open a sports bag that contains everything from torches to toothpaste. He gets out some foil sleeping bags and helps one of them in. Then he heads back to the car and brings back a proper sleeping bag and a pop up tent, both brand new.

Chris has been doing this for years. He was homeless himself and ran into problems with drugs. When he met Kelly, she got him off the streets and now theyâve got five children together. They both run an organisation called Left Outside Alone â named after the Anastasia song Ì¶ which dedicates itself to providing direct help to the homeless.

Things are run on a shoestring. âAll voluntary and all donations.â Chris says. âWe donât get nothing at all Ì¶ not even a quid.â

âYou just feel sorry for them, donât you.â Kelly says. âSometimes they get beat up when theyâre asleep.â 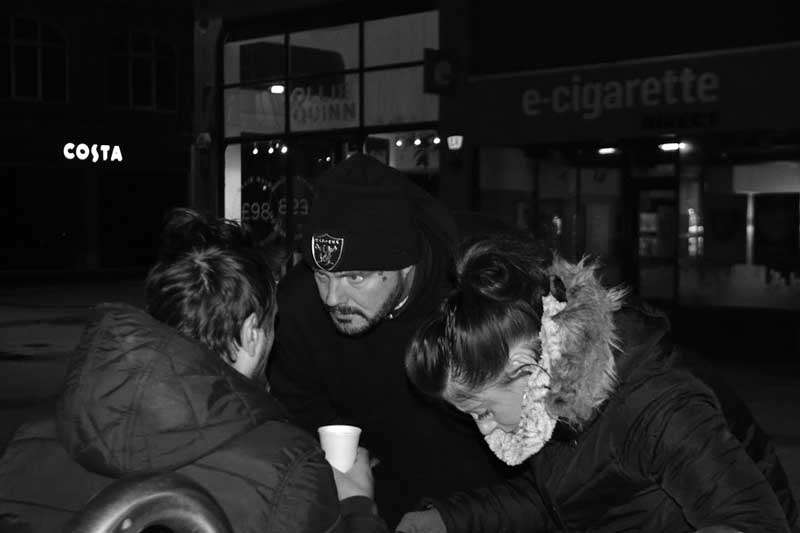 Chris and Kelly Newth, serving tea and helping to secure someone accommodation for the night. Â© Seb Cooke

In December, Kelly and Chris organised a demonstration after a thirty-two year-old woman was found dead in the Cathays park area of Cardiff. Lindy Louise Pring had been sleeping rough in a tent on a particularly cold night. Her death sparked outrage across the country, but the police and the council went on the defensive over âOperation Purple Ashâ. The demonstration itself attracted a lot of interest, but the only high-profile politician to attend was Leanne Wood, the rest decided to stay away.

The growing severity of the homelessness crisis has left many people wondering where the state is in all of this. Just a few hundred metres away from where we are the tallest building in Wales is being constructed, while nearby blocks of flats lie empty.

But itâs not that the state is invisible or indifferent; itâs that its presence often makes life even harder for homeless people, either through Section 35 orders or the deliberate removal of blankets and duvets from the few areas that rough sleepers can still go.

Taylor sips her sugary tea from a styrofoam cup and happily talks about these problems.

âI have loads of issues with the police.â She says. âI donât know why, but they always pick on the homeless. Itâs like theyâve got nothing better to do. Thereâs murderers and rapists out there and theyâre too busy giving Section 35s out.â

She points to Chris and Kelly: âI got to give it to you guys though, fair play. Thereâs not many people who come out in the freezing cold.â

If the people in power took their approach to homelessness Ì¶ doing whatever it takes to help people â things might be different. As it stands, the crisis is only getting worse. 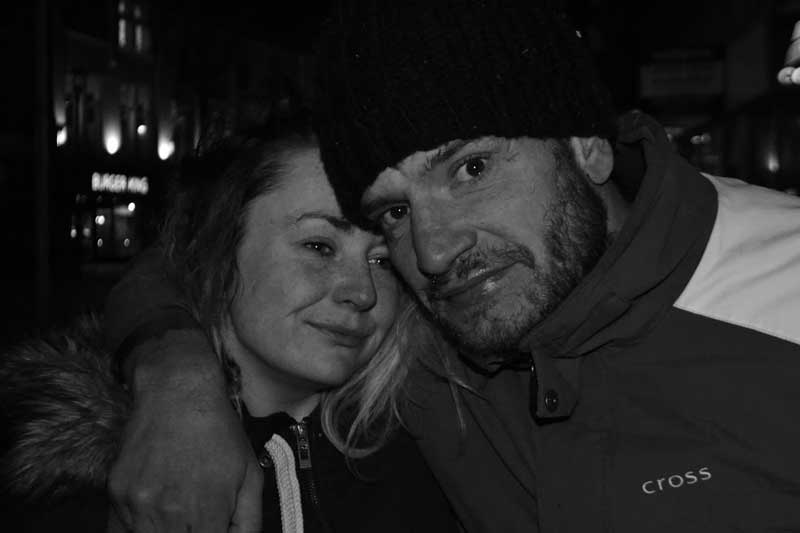 More information about grassroots activist groups who are confronting the homelessness and housing rights crisis in Wales:

Seb Cooke is a writer and photographer based in Cardiff.

Brexit: A moment of Existential Danger

Y Lle Celf: Resources of Resilience for a Fragile World

Sara Rhoslyn Moore reviews Y Lle Celf art exhibition at the 2017 National Eisteddfod and finds common thematic threads of international co-operation in the face of inequality and war; breathing new life into the Eisteddfodâs role as a festival of peace. She highlights the work of artists to watch out for in the future, and offers reflections on how the exhibition could evolve in forthcoming years to best give prominence to 21st-century Welsh visual art.