Tyrrau Mawr/Big Towers (Bedwyr Williams, 2016) shows a location familiar to anyone with an interest in the visual culture of Wales: Cader Idris. The site can be used to trace developments in style and technique in landscape art from Welsh and visiting artists, from Richard Wilson and J.M.W. Turner to Duncan Grant, Augustus John, J.D. Innes, Christopher Williams and serial Cader painter, Kyffin Williams. 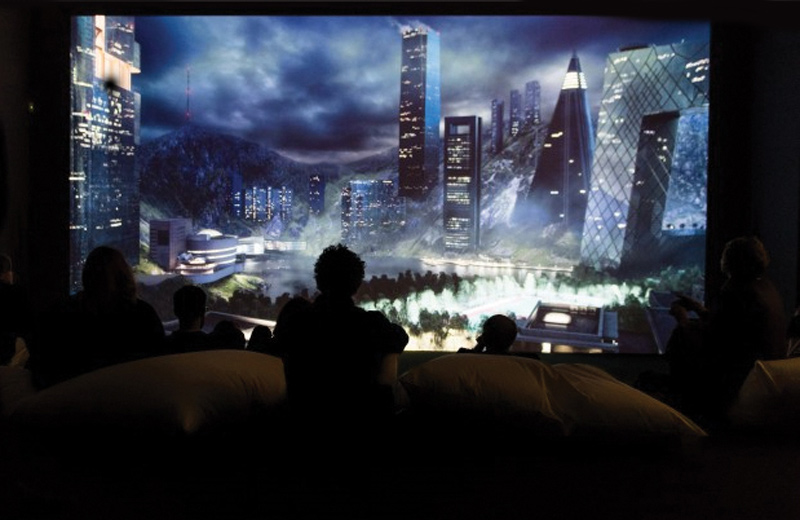 Bedwyr Williams shows Cader Idris having sprouted a new mega-city, gleaming skyscrapers surrounding Llyn-y-Cau. The twenty minute video loop projected to 11 metres in high definition shows the change from night to day, the lights of the buildings indicating the new population of the city, the absence of figures in its public spaces emphasising the alienation and loneliness of modern urban life. The video includes a narration by Williams describing scenes from the early history of the city. The city is young (not even as old as some of the fillings in the narratorâs teeth, as he reminds us) but the vignettes evoke the weariness created by hyper-modern, urban life, albeit retaining an unexpectedly warm humour throughout. An example:

ââI love it when an architect is allowed to playâ¦â Says someone, in a very good fish restaurant.â

Written on the page the statement appears cutting. It addresses not only the inanity of the chattering classes but also the vacuity of contemporary art criticism, which makes reviewing an exhibition of contemporary art very difficult. This isnât delivered with malice, though. The narration of the work emphasises Williamsâs particular strengths as a writer as well as an image-maker, and while the works exhibited should be given careful and thorough consideration, the viewer is given a gentle reminder not to take themselves too seriously.

A common criticism of contemporary art is its alienation from everyday events, and the opacity of its subject matter and language of its discussion. Such a criticism cannot be levelled at âArtes Mundi 7â. The themes addressed by the work of six international artists: migration, despotic rulers, urban expansion and gentrification and the processes associated with food production could not have been more of the now. 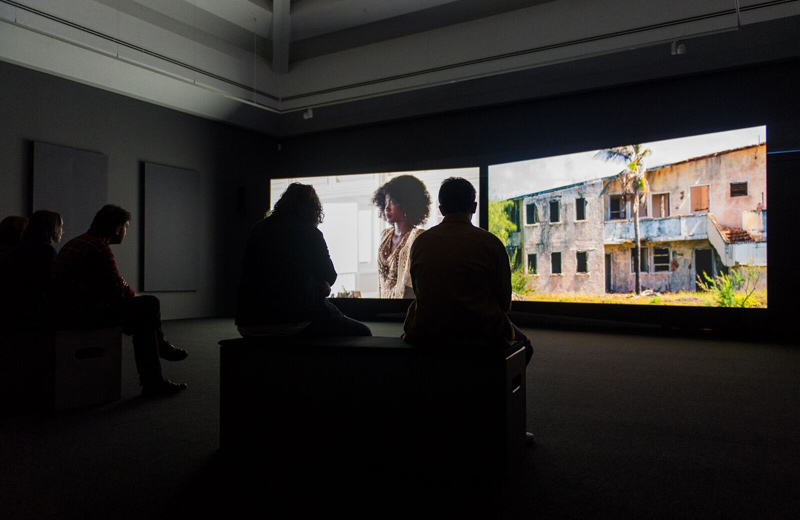 Another highlight of the exhibition is Auto Da FÃ© (2016) by John Akomfrah, the artist who won this yearâs Artes Mundi prize, which builds on previous work using lens-based media to explore issues around migration, colonialism and diaspora. The two-channel video is an episodic telling of migrations caused by religious persecution, beginning with the flight of Sephardic Jews from Brazil to Barbados in 1654, to present day disasters in Hombori (Mali) and Mosul (Iraq).

Auto Da FÃ© is not as sensually overwhelming as Akomfrahâs Vertigo Sea (2015), a three-screen film examining manâs relationship with and use of the sea through such activities as slavery, migration and whaling, but is equally affecting. The silence of the characters in each episode is disquieting. It reminds the viewer of our own comforting ignorance about historical flights from persecution and wilful silence around the causes of crises which face us today. Episodes are differentiated by title screens and marked by characters wearing period costume from particular eras, but the disparate settings are filmed at same location, emphasising the commonality of the trauma and loss caused by migration. Transport and movement are also central to Amy Franceschini/Futurefarmersâ installation in which the artists shipped grain excavated in Norway by sea to Cardiff en-route to the Middle East. The various cases and cabinets show the objects associated with grain cultivation and transport that have been part of food production for centuries, and Franceschini/Futurefarmersâ interactions with bakers on their journey by sea, but the epic nature of their work can only be suggested in a gallery setting.

Loss is a key theme of Lamia Joreigeâs contributions to the exhibition, both literal (one work lists objects that are missing from the National Museum of Beirut) and metaphorical: Under the River is a three-channel video installation documenting the rapid urban development of districts around a river in Beirut and resulting changes to demography. Interviews with Syrian construction workers who arrived in Lebanon after fleeing the civil war are particularly affecting. Joreigeâs work is split between the National Museum and Chapter Arts Centre, which also includes a striking audiovisual installation by NÃ¡stio Mosquito. The video aspect of the work shows the artist playing the part of a despotic leader rehearsing a speech, interrupting himself to record notes for speechwriters or other aides. Itâs a witty work which takes on a tragi-comic quality in the current political climate.

NeÃ¯l Beloufaâs installation (in the National Museum) also addresses power, conflict and social interaction. World Domination (2015) shows participants in a game of global politics. The film is projected onto an uneven resin surface, its crags and protrusions resembling a rock-face. While this makes for a number of striking images of tension from the participants, my inability to read the subtitles or follow the progression of the game made it a frustrating look at the machinations on global politics, although perhaps this was the point.

The installations at Chapter felt sparse: perhaps an unintended outcome of Hiro Steyerlâs withdrawal from âArtes Mundi 7â for personal reasons. Her work around the proliferation of digital images in relation to feminism and militarisation would have worked well with the other selected artists. Curator Karen MacKinnon made a statement following the withdrawal that âwe are already discussing working with Hito on another project in the not too distant futureâ. If an exhibition comes to fruition and is of the quality of âArtes Mundi 7â this will be one to look forward to.

Lloyd Roderick is Subject Librarian for Art and Art History at Aberystwyth University. His PhD research focused on the digital reproduction of art collections and landscape art in Wales.

Peter Wakelin celebrates the life and work of the Pembrokeshire-based artist John Knapp-Fisher.

A Thousand Blown Out Windows

Peter Lord drops in to the Planet studio to talk about his book, Relationships with Pictures - Lloyd Roderick poses the questions