2017 has not seen an auspicious start. In fact, the zeitgeist is looking distinctly unpromising. The leader of the âFree Worldâ is a narcissistic, unhinged neo-fascist, who has surrounded himself with a cast of villains whoâd seem more at home in a Batman comic than in the Whitehouse.

Back in old Blighty, we have an unelected Prime Minister who has been appeasing the neo-fascist, having flirted with the ideology herself in her Tory conference speech. Sheâs also pandering to the deluded Eurosceptics in her own party and the London press â as well as an increasingly boisterous Brexit mob (Iâm sure there are many thoughtful, measured Brexiteers â you just donât hear them much).

Increasingly, it feels as though we are living in the age of the bullies.

On the Home Front

On our own doorstep, UKIP are making themselves ever more at home in our Senedd. The appeasement with which they have been met, and their creeping normalisation, has been symbolised by grinning publicity photos with other AMs, and most starkly by a decision by one of the Assembly committees: A group who were willing to take a public stand against British neo-fascism â Cymdeithas yr Iaith â were batted away from the Assembly for notifying a Committee Chair that they would respond to any questions from UKIP with a statement outlining their objections to their prejudicial politics.

At this rate, I am tempted to head down the betting shop and place a few pounds on Neil Hamilton becoming the next First Minister. Sounds unrealistic? They said that about Trump.

Picture this: come 2020 Brexit will still be a distant dream as negotiations prove to be every bit as hard as the experts predicted; the British economy will be tanking while Brexterity (a combination of Brexit and austerity that will bring further biting cuts) will have led to more angry, disillusioned and desperate people; the Labour Party vote in its heartlands will crumble to an emboldened UKIP braying about the failure of the elites to extract us from Europe, leading to a sizable UKIP representation in Westminster â enough even to ensure a Tory-UKIP coalition.

Even if this coalition does not transpire, with the wind in their sales, in 2021 UKIP will trounce Labour in parts of the Valleys, bringing in at least double the seven AMs they have at the moment, leaving the road clear for a Tory-UKIP coalition led by Mostyn the Mischievous of Wiltshire.

Is it too hideous to contemplate the Hamiltons as Walesâ first couple? If 2016 taught us anything, everything is on the table in this post-truth age, and if the Seneddâs progressive parties continue to behave in such a passive way towards UKIP then this wonât seem so far-fetched.

There are, of course, any number of things these parties can do that can beat back the neo-fascists; although they will have to ensure a balance of undermining them while not being seen to exclude them in such a crude way that ends up feeding the monster.

UKIPâs actions need to monitored, their pitiful contributions and hypocrisies exposed, their idiocy and prejudices drawn attention to on a daily basis, their vacuity shown up; the reality of their Tory pedigree must be emphasised â especially in the Valleys where these associations are the most powerful antidote to their appeal.

A Time for Utopia

The picture I have depicted above, however, represents a doomsday scenario we must avoid: the victory of poisonous, yet mesmerising Far Right forces. What we actually need, more than anything, is a vision of hope.

We need inspiration; we need to be able to counter the complaints and vacuous promises of UKIP with real ideas, real actions and a message that tells all of us that we have a way forward that represents the sort of revolution we really want here in Wales, and for that matter, across the Western world.

These utopian yearnings are not fanciful. In fact they are a matter of necessity, because the misery unfolding in our society, the challenges of climate change and an ageing population, the anger and resentment building up through relative deprivation must be responded to otherwise an implosion of some sort will inevitably happen.

So in this spirit, let us imagine a 2017 that lifts us off from the rock bottom that was 2016, and puts us on the road to redemption.

Other European countries, chastened by the collective insanity of Britain, will resist the urge to tack further Right and will ensure that less destructive powers remain at the reins. The Left and Centre-Left will begin its soul-searching in earnest instead of satisfying itself with the same mealy-mouthed reheated hash that was becoming old a decade ago (say what you want about Blair, but the guy had a vision and the wherewithal to execute it). They will seek radical, redemptive ideas that will put community and sustainability at the heart of a new social democratic programme (drawing in part on the values that inspired the early utopian visions of figures like the Welsh socialist Robert Owen, but became gradually less influential on the Left and ultimately, fatefully, dropped out of the picture during the 1900s).

Hordes of the middle classes will be persuaded which side they should actually be on, and will realise that neoliberal government serves only the top 1% and very few others. An inclusive progressive politics will ensure that the majority in Western society become conscious that they have a common cause, and that it is not immigrants who have lowered their living standards or destroyed their communities.

Here in Wales, we will be at the forefront of this movement, with Elin Jones realising her ideal of opening up the Senedd and policy circles to the energy and industry of our public sphere and universities. Our politicians will stretch every sinew to use their curtailed autonomy to take a different path to that of a self-destructive Britain.

We will start to listen to talented Welsh experts such as Cardiff University economist Calvin Jones, instead of being influenced by figures from the past such as his colleague Patrick Minford, a former adviser to Margaret Thatcher, who has supported policies so destructive to our economy and community. We will remember who we are, and rekindle our collective memory of ourselves as a radical, internationalist and proud nation in order to inspire new and daring political achievements.

Buoyed by the tidal lagoon being given the go-ahead in Swansea, we will resolve to become a world leader in sustainable energy, making the most of our comparative advantages across the country in this sector. (Fingers crossed on that one â although if the Tories donât approve the lagoon, Plaid Cymru will never have a better chance to make the case for independenceâ¦)

We will move Wales forward as one nation, using effectively the talents of our people, our resources and our culture in all its wonderful variety. We will be bold in our decisions and policies, adopting ideas such as the basic income in order to get to grips with our economic struggles in a positive and constructive way.

The Grounds for Hope

If people think this is fanciful talk, they should listen to the positive voices and fade out the naysayers. 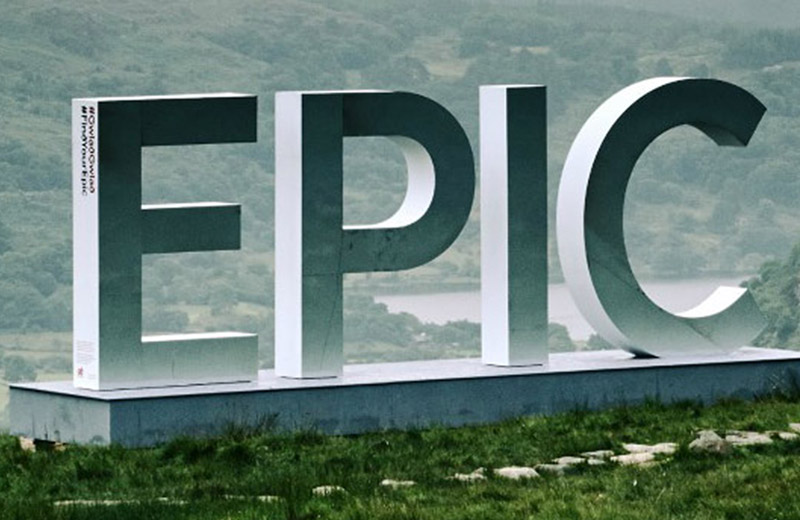 Visit Wales' EPIC art installation, which travelled the country in 2016 to promote the Year of Adventure (Picture licensed under the Open Government Licence v3.0)

One of the most heartening events Iâve been to in recent times was a talk held by Capital Ideas with Dylan Griffiths from the company SmÃ¶rgÃ¥sbord (who devised a branding of the nation for Walesâs âYear of Adventureâwith a motto of âfind your epicâ and Professor Terry Stevens, long-time tourism expert. They talked with energy and hope about the possibilities we have in Wales, our virtues, our different way of seeing the world.

Their biggest frustrations were the mental and practical obstacles that lie in the way of achieving our aims. Stevens bemoaned the fact that a nonconformist nation in terms of its religious heritage has become so conformist in its actions and behaviour.

This point reminds us of an age when Wales was a world leader, at the forefront of the industrial revolution. This was a time of burgeoning confidence in Wales, that led, in the words of Kenneth O Morgan, to the rebirth of a nation â grounded in a spiritual energy and positive vision of what Wales might achieve.

We live in a different age, of course, and from necessity we must ground our motivation and vision in ideas somewhat different to those of our religious past. This does not mean, however, that the radicalism and spirituality that has made us who we are today should be forgotten, rather it should be reinterpreted and reinvented in a way that makes sense to us, and speaks to the transcendent potential of human nature and the wider, global challenges of our time.

Unlike our forefathers we should also do so in a way that makes the most of our unique culture, history and language as âresources of hopeâ (as Raymond Williams put it) in a world of increasing capitalist drabness and homogeneity â with an emphasis on homegrown industry and maintaining our social as well as economic capital in Wales, rather than relying on policies such as foreign direct investment that recalls the extractive practices of the old coal barons.

In this regard we might remind ourselves of historical precedent: that home-grown success can be done and is achievable. My personal favourites are the Davies family of Llandinam; a family who ensured the benefits of their success were reinvested in Wales: David Davies or âDavies the Oceanâ accrued massive wealth from construction, railways, coal and docks, his granddaughters bequeathed the nation with one of the finest art collections in Europe and an arts centre in Gregynog still revered today, and his grandson helped to build Walesâ reputation as a pacifist nation through his tireless work and investment.

A Time to Choose

This is an unsettling time of great change; one where we cannot afford to allow âdriftâ towards whatever fate these new forces of evil are dragging us towards. The famous words of one of our finest historians, Gwyn Alf Williams, best express the challenge that faces us in Wales, once again today.

The Welsh as a people have lived by making and remaking themselves in generation after generation, usually against the odds, usually within a British context. Wales is an artefact which the Welsh produce. If they want to. It requires an act of choice

It is time for us to choose once more. And this time the choice could be more momentous, or fateful, than ever before.

Huw Williams is an academic and author, with research interests in egalitarian political philosophy and the history of ideas in Wales. His volume, Creodau'r Cymry, was published by UWP summer 2016, and he is also a co-author of the publication Global Justice: The Basics, with Routledge.

Following our invitation to pool ideas for strengthening Welsh internationalism after the EU referendum, Meic Birtwistle offers snapshots of past struggles against the Far Right in proposing how to form alliances against rising racist attacks and support for UKIP in the wake of the Leave campaign.

For Shame Cymru Fach, For Shame