Then Came We, Remaining?

Responding to the current Brexit stalemate and the looming prospect of No-Deal, Daryl Leeworthy proposes how to strengthen the Remain campaign in Wales, and reflects on how this feeds in to creating a new, 21st-century social democracy, designed by Welsh Europeans. 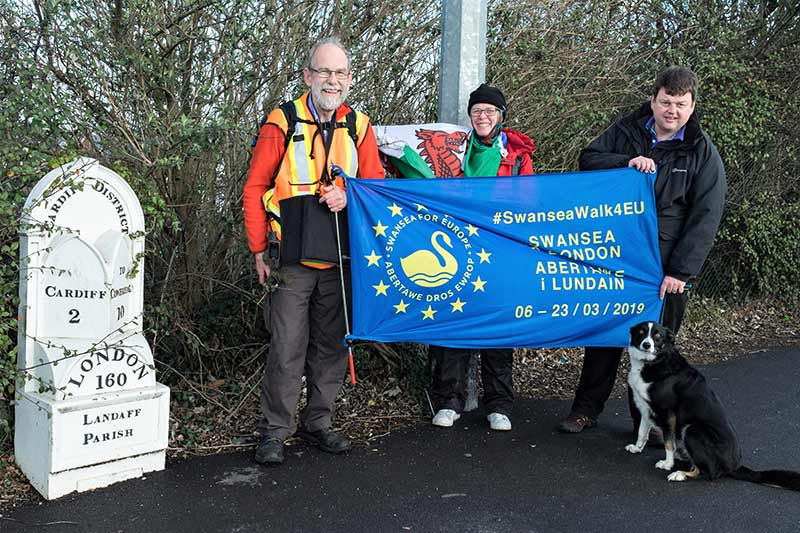 Three years after the referendum on membership of the European Union, we remain. Half in and half out. Our politics has reached stalemate. Cynicism continues to grow, fuelled by social media algorithms and the failure of traditional print and broadcast media to robustly challenge both the politicians and the public. Prime Minister number three has just taken office determined to bring about No Deal. The former incumbent of Number 10 may have insisted that No Deal was better than a Bad Deal, but she knew it to be a lie; she knew the cost would be chaos. Propelled by right-wing populists and his own ego, the present leader of the Conservative Party has no such conscience.

For those of a Remain disposition, me included, the last three years have been a little like the scenario in Edgar Allan Poeâs gothic horror story, The Pit and the Pendulum. Each time we think we have found safety, following parliamentary manoeuvres to prevent No Deal or further (often highly-qualified) revision to Labourâs position, a fresh torture forces us to seek new solutions, the room for manoeuvre shrinking all the same. Perhaps, like Poeâs prisoner waiting for liberation, the chance to Remain will come too late. The polling data, which shows Wales steadily moving towards a pro-EU position1, is to be welcomed; however, the circumstances which led to the Brexit vote in the first place have not been ameliorated. Those polled may well have changed their minds since 2016, whether Wales as a whole yet has is another matter: the European elections pointed to a continued impasse, a hardened polarity between Leavers and Remainers.

Remain faces two major challenges: that it is not a unified force with a uniform set of objectives, and that it has yet to provide a substantial response to austerity and widening democratic deficits at all levels of government â issues that fed into the Leave vote of 2016. Whether they support Plaid Cymru, the Greens, the Liberal Democrats or Welsh Labour, Remainers are split across multiple party lines and believe in different futures for Wales. Not so the Leave forces. For them, there are two options, but both are aligned to a similar politics â either the Brexit Party led by Nigel Farage or the Conservative Party led by Boris Johnson. Both likely to be socially conservative and populist with little desire to bring an end to austerity which has enhanced the status of the few at the expense of the many. A temporary Remain alliance may yet prove necessary, but bringing it about will not be easy â there are many historic enmities. A Remain alliance, above all, needs to somehow overcome these divisions and offer a robust alternative to austerity: in so doing it may prove able to win over Lexiters (however few in number they are in practice) who continue to be convinced of the possibilities of developing socialist politics outside the confines of what they regard as the neoliberal European Union.

Austerity sits at the apex of a range of social divisions, but at times its close association with the Conservatives and Liberal Democrats in London has provided all-too-convenient cover for decisions that need not have been taken or for which there were alternatives. Closing a library or leisure centre, changing the school entry age, moving bin collections from weekly to fortnightly or monthly, or removing funding for liberal adult education (that is, learning for learningâs sake) is a course of action decided upon here in Wales by us, not forced by Whitehall diktat. Historians are not going to find in the archives in a few decades a piece of paper or an email headed by a Whitehall department or signed by the cartoon villain from the government that says, âyou must shut down this service, or elseâ. However, they may well find such a document in the Welsh Governmentâs records, or the papers generated by county councillors and their officers.

Recognising this truth, we can begin to fathom the answer and a way forward: we blame the European Union for our problems because it is far away and does not answer back; we blame Westminster because it is far away and does not answer back. Those closer to home who have made the decisions we are angry about get off scot-free. Yet if the Welsh had turned their anger and frustration at austerity and ever diminishing opportunities for personal fulfilment on those who had made the choices, rather than at distant institutions, perhaps we would be moving to a post-austerity situation and post-neoliberal politics; and the Welsh Labour Party would now be at the forefront of this politics, rather than expending energy belatedly scrambling to get back on the Remain campaign coach, which it should never have left to begin with. To paraphrase the Valleys writer Gwyn Thomas, âThen Came We, Leaving?â.

We should remember that it was Wales, not England or Scotland, that bequeathed social democracy to the United Kingdom in the twentieth century, and Welsh politicians such as David Lloyd George, James Griffiths and Aneurin Bevan who developed and delivered the welfare state in its liberal and social democratic forms. Likewise, it was Welsh politicians such as Leo Abse and Roy Jenkins who enabled the liberalisation of the law, sweeping away the death penalty and some of the discrimination towards gay men and towards women seeking an abortion or a divorce. So, if there is a solution to neoliberalism and resurgent social conservatism, and there must surely be, it is probably up to us â the Welsh â to find it. Or rather, should I say, up to the Welsh Remainers.

Aneurin Bevan once observed that âmany old traditions and strongly rooted beliefs are now being eroded by swiftly moving social changesâ¦ In a democratic community the burden of choice is cast on the individual citizen. Quite often [they] find this burden insupportable. [They are] then ready to have it taken from [them] by some authority to which [they] can give unquestioning obedience. Here is the point where dictatorship offers relief.â Austerity and neoliberal governance have left many â on both sides of the Atlantic â ready to accept this unburdening by voting for Donald Trump, Marine Le Pen or Nigel Farage. It is not, yet, too late to recognise what is happening and to respond.

If, somehow, we do retain our membership of the European Union, and the prospects are not all that promising, we cannot go back to business as usual or we will soon find ourselves in this situation once again. To ensure that Remain becomes the choice that the majority of the Welsh align with, it must mean more than it does now: it must become the new kind of politics which challenges neoliberalism, and prejudice against immigrants, women and the LGBT community. It must become a twenty-first century social democracy with all the ambition of its twentieth-century equivalent but with contemporary relevance and aspiration: a society and a democratic system designed by us, the Welsh Europeans.

Daryl Leeworthy is a historian and author of Labour Country (Parthian, 2018). His next book, A Little Gay History of Wales is published by University of Wales Press in October.

Our Welsh Keywords offers contemporary perspectives on the meaning of words in Welsh, inspired by Raymond Williamsâ Keywords. In this issue, Manon Steffan Ros reveals her new word-crush: what is more merciful than mercy, can shift into a word that means bric-a-brac, and in synaesthetic terms is dark green and dusty-smelling?

Reading Between the Lines: Morfa Mawddach to Llandecwyn

Our series of creative responses to Wales' rail network, Reading Between the Lines, brings new insights into a Wales fragmented by its travel infrastructure. In this issue, Mike Parker offers his uniquely wry, subtly politicised perspective on a beautiful stretch of landscape that has endured against the odds: Morfa Mawddach to Llandecwynâ¦

Kiribati: More than a Canary in a Coalmine

Film-maker Sara Penrhyn Jones reflects on her work on the Pacific island nation of Kiribati, which faces potential obliteration from climate change; how local experts introduced its unique heritage to her, and how our sense of global justice is inhibited when such atoll communities are only acknowledged as a warning signal for what could happen to more powerful countries.