In the lead-up to Trumpâs official visit to London, Leanne Wood argues that confronting Trump is not enough: we must defeat the ideas that sustain him by addressing the root causes of inequality and hopelessness. 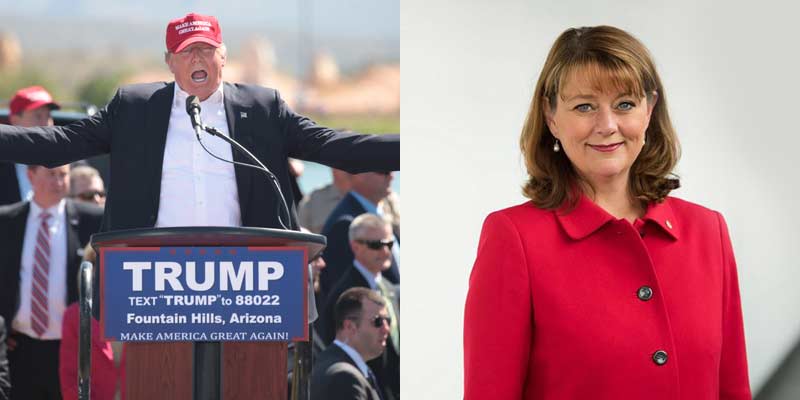 The âgreatâ wall of America, a Muslim ban and refugee children being kept in cages. These are policies more befitting of a 20th century dictator. However, Trump manages to convince millions of 21st-century citizens that this is in their interest. It is all part of a grand plan. A plan conceived by a cartoonish billionaire, in the name of the common man. It is terrifying and depressing in equal measure that such polices, such callousness, has returned to mainstream politics.

I am â youâll be unsurprised to hear â not terrified of Trump. Heâs just another authoritarian who has adorned a grey suit in search of respectability. I am quite well versed in giving such people a dressing down.

Unfortunately, I am unlikely to be afforded the opportunity to offer my insights to the so-called leader of the free world. When the President of the United States makes his way to the UK this month, I wonât be receiving an invite to the ceremony of suck-up that will take place in Westminster and Whitehall. Instead I will be with the thousands of people who will inevitably be taking to the streets to show our displeasure at the policy of appeasement Westminster has decided employ with the latest occupant of the Oval Office.

Trump is undoubtedly a symptom of a sick society. Inequality, injustice and a lack of hope means that purveyors of utopian idealism â however unfeasible and dangerous â can court huge support. A similar phenomenon is taking place on our own continent. Across Europe racists are once again slithering into our democracy. Using the appearance and language of democratic party politics to obtain a veneer of legitimacy, alongside using the controversial question of immigration for political capital, they have gained access to the political mainstream. In Austria, Italy and Germany they have quite successfully clawed their way into various offices of state. Last year we saw France flirt with the idea of electing a far-right President in the form of Marine Le Pen and not so long ago, Golden Dawn brandished swastikas and still managed to convince a small but significant number of Greeks to vote for them.

It is of course not an original parallel to draw, but the far-right populism of Trump and the neo-fascist parties of Europe was echoed in the EU Referendum. I am in no way complacent, but I do believe that in the white heat of political argument, these parties will largely disappear. The common-or-garden British fascist party has continually imploded â the BNP, UKIP, Britain First are all very much disappearing or have disappeared. The problem is, the ideological residue they leave behind does not disappear. A logo may fade, but the hate-filled ideas behind it may well have taken root. What is worse, without the relatively transparent, organised structure of a political party, these ideas can often permeate into more mundane and less obviously political institutions, and into everyday conversation â making them harder to challenge and uproot.

That is why it is imperative that we donât just contest the party or the figureheads, but the very ideas they represent. It is also the reason why the UK Governmentâs grovelling approach to Trump is so dangerous. Trump is transient. His ideas are not.

By inviting him in to the heart of the British establishment the Westminster Government are tacitly endorsing his abhorrent approach to migrants, Muslims and society at large. They arm the racists and regressive elements with another string for their bows, by giving credence and paying deference to Trump.

That is why it is critical that we not only protest against Trump, but also the authoritarian ideas and concepts which he represents. The same is true for the ideas of hate that permeate our politics and our society. We must not only take apart the arguments in the abstract, but challenge the ideas on the doorsteps, pubs and rugby clubs. âWestern societyâ (if it can be defined as such) is undoubtedly sick, but right-wing populism is definitely not the cure.

We must quickly turn our focus to the cause of this sickness â the inequality, injustice, hopelessness â not just its symptoms. This is vital in order to rehabilitate a society that is increasingly attracted to the ideas of the extreme Right. We must deliver a reason for hope not desperation. It is only through fixing these root causes will we destroy the ideas that gave Trumpâs politics the lifeblood it needed to enable a racist to take control of the White House.

Leanne Wood AM is the Leader of Plaid Cymru â The Party of Wales. She represents Rhondda in the National Assembly for Wales.