Who is the sanest of us all?
Public irrationality and private suffering 20.03.18 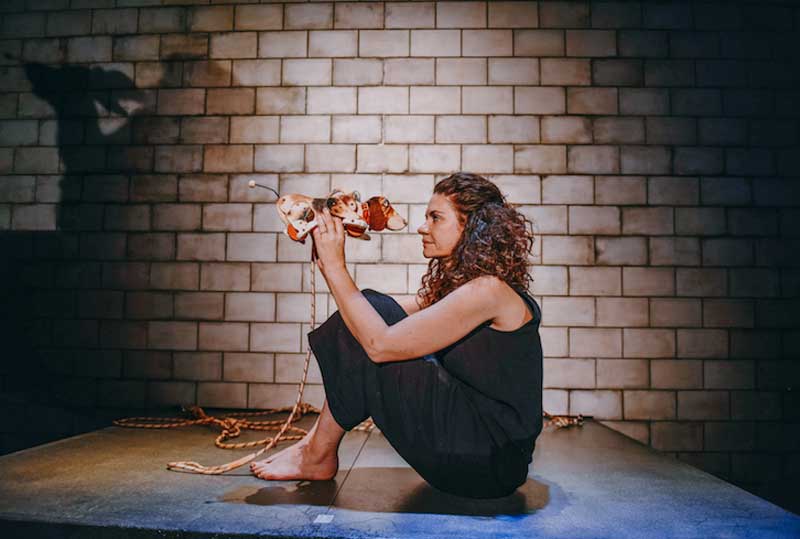 Every decade or so, a piece of art on the subject of depression emerges, that can provoke laughter, tears and the reformulation of previously held ideas. Anweledig (Invisible) is one such work: a very funny, incisive, tragic and ultimately uplifting play and production. Aled Jones Williamsâ writing is full of resonant imagery, muscular and surprising. The play was developed through an invitation from an eminent psychiatrist, Professor David Healy, for Cwmniâr Fran Wen to consider research material documenting patientsâ experiences in the old Denbigh mental health hospital, with a view to developing a theatrical production which might challenge the stigmas attached to mental illness

The scenography of the production, by Gwyn Eiddior, presents the audience with a grey block wall with digitised sea imagery projected onto it, and a central, small jetty. Sam Jonesâ sounds of the sea gently wash over the action like a complicated heartbeat. This jetty is, in turn, both an internal and imagined space as well as a real place for the main character: Glenda, a woman having a breakdown, portrayed by Ffion Dafis. Sara Lloydâs direction is taut, inventive and beautiful. As well as playing Glenda, Dafis also embodies the protagonistâs husband Huw, her best friend Betty and others, with very effective timing, irony and comedic verve. Movement work by Eddie Ladd generates the sense of the character being on the edge, compelled into a vertiginous choreography that also encompasses regression, resistance and growth. Dafis gives the performance of her life, paying precise attention to minute details of vocal nuance, rhythm and physicality. Seventy-five minutes flies by.

Art provokes questions and make us connect to our previous experiences, of both life and art. This production propelled me into that âspiderâs webâ of associations: Kate Robertsâ novel Tywyll Heno (1962), which I read as a teenager, before I knew depression existed; plays by David Edgar (for example, Mary Barnes, 1978), Sarah Kane (4.48 Psychosis, 2000), Anthony Neilson (The Wonderful World of Dissocia, 2004); the unsettling visual impact of paintings by Francis Bacon, Edvard Munch and Van Gogh; Damien Hirstâs Venetian extravaganza Treasures from the Wreck of the Unbelievable. All these works challenge and destabilise the sense of what is real. So does the âthe no-manâs land of a long-stay wardâ, as it is described in Anweledig, where the onlooker/spectator/patient contemplates the âself I have never met, whose face is pasted on the underside of my mindâ (Kane, 4.48 Psychosis1). These works offer reminders of how art and (in)sanity can connect so profoundly. In the aforementioned plays, therapists use, or encourage, art, to help characters reach out to aspects of their selves, and to others. At one point of Anweledig Glenda says:

Creu dawns yda ni i drio mynegi beâsyâ tu mewn i ni. A (sic) mae oân help. Mae symud dy gorff yn nes atiân amal na geiriau. â¦Y nghorff i yn ei symudiadau fel petai oân trio fi arall ymlaen.
Creating a dance helps us express whatâs inside us. It helps. Moving your body gets you there more often than wordsâ¦ Itâs as if my bodyâs movements are me trying on another self.

Three of the plays cited propose dancing as a form of release and return to a renewed self. It is odd that funding for the creative arts is being slashed in schools and universities, given the rising level of mental health problems among young people. These cuts to arts provision are but one indication of a dysfunctional and unhealthy society. The very word âinsanityâ is provocative: might it mean a personâs so-called madness is a form of being that is deep inside what we term âsanityâ, not outside of it? Insanity may be seen as a form of rejecting an intolerant, cruel, oppressive, negligent and insensitive system. Edgarâs Mary Barnes asserts this, and it is implicit in Kaneâs 4.48 Pyschosis. Anweledig is another such play of resistance: it depicts an insane woman stubbornly surviving and healing, by making the people around her look, listen and see clearly, refusing their statements of denial and evasion.

Mary Barnes in Edgarâs play draws with chalk, all over objects and surroundings, âmaking connections between people and thingsâ. Anweledigâs Glenda makes connections through her silence and solitude first, and then her dance, and so begins her journey to re-connect with both herself and those around her. At the beginning of the play she regresses to an infantile stage, like Edgar and Neilsonâs protagonists. In order to begin her journey, she locates herself imaginatively by the sea, and in early family experiences. The sea-sounds form a comfort blanket and a provocation. Also like characters in Edgar and Neilsonâs plays, Glenda is briefly struck dumb, her thoughts tumble around constantly in her head, but she cannot utter them aloud. Words become traps, holes through which to plunge into psychosis:

Hen fasdad o air ydy âPam?â. Am i fod oân gwybod nad oes Ê¼na Ê¼rochor arall iddo fo. Mond nos. Uffar o nos. Ac âAM BYTHâ yn cyfarth tu mewn iddi hi.
âWhyâ is an old bastard of a word. Because it knows there is no other side to it. Just night. Hellish night. And âFOREVERâ barking inside her.

When Glenda sits rigidly in her chair, it is as though her petrified suffering marks the beginning of how she asserts her âcomplete identityâ, a rebellion which brings a torrent of âwhysâ and proposed reasons for her âdepressionâ from others. The only way she can control the effects of her own thoughts and responses to the outside world is to shut down her exterior. Glenda finds recuperation worse than the illness itself because it is âmor uffernol o ddiamcanâ (so hellishly random). Out of her stillness connections begin to be formulated. The word in Welsh for the orchid her husband has given her, âTegeirianâ, works on her as if âthere are two hands that could open a little place, a secret room, down, down inside meâ. She begins to take a delight in words again. âTegeirianâ becomes the name for her recovery. Naming becomes healing, and Glenda learns that she has to own her illness; she embraces the anarchy and demands that encompass recovery. Her family and friends are challenged to embrace those feelings too. It is a journey, to meet someone she hasnât met properly yet, but who is dancing her way towards her.

All translations by Charmian Savill

Anweledig will be performed at the following venues:

Charmian Savill is a theatre director with a particular interest in radical Welsh and English theatre.

All Alone in Icy Seas: Wales, Brexit and Nordic Noir

Hywel Dix argues why the popularity of the Nordic noir genre, and its Welsh noir offspring, has something significant to say about the lack of a collective, aspirational European identity; and Walesâ isolation from both continental Europe and the other nations of the UK.

Teacher Rajvi Glasbrook Griffiths looks in-depth at the proposed new curriculum, which will be finalised in 2019. She gives an insight into the transformative power of the arts in education, and argues that there is a danger that the current lack of clarity about expressive arts and literacy provision in the curriculum would undermine this.

Our Welsh Keywords offers contemporary perspectives on the meaning of words in Welsh, inspired by Raymond Williamsâ Keywords. In this issue, Sara Peacock discusses how there are particular distinctions made between a âlearnerâ (dysgwr) in Welsh and a âspeakerâ (siaradwr). She draws on linguistics and pedagogy to question at what point one become the other, and asks what the existence of a distinct, parallel learnersâ community means for Welsh-speaking society, and strategies to ensure the language survives.

Reclaim our Land, Sea and Sky: The Welsh Peace Movement

Mererid Hopwood reflects back on the 2014 to 2018 commemoration of the First World War in Wales and the UK, asking what these activities say about memory, mourning, nationhood and inequality; looking to the future to offer proposals for how Wales can contribute to the struggle against 21st-century militarism.