A decade after the Great Crash, Steve Groves argues that a top priority for Mark Drakeford must be to develop a radical anti-poverty programme for Wales to help counteract Westminster austerity politics. 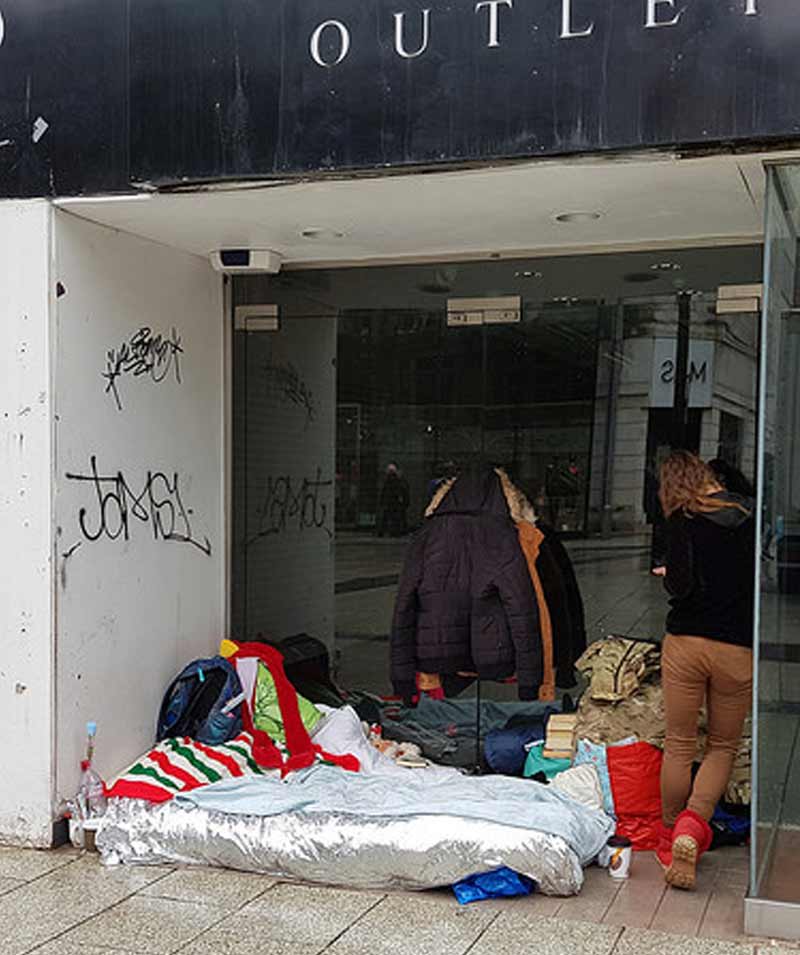 Ten years after the walls came tumbling down, the United Nations sent their top man in. Professor Philip Alston, Special Rapporteur on extreme poverty and human rights found that civilisation had yet to return to what was nostalgically referred to as ânormalâ before the crash..

âPoverty is a political choice,â the man from the UN said. Austerity is not essential for the economy but is driven by a desire for âradical social engineeringâ.

How dare he use that language, the Government in Westminster said. It was of an âextraordinary political natureâ. Fancy that.

And the people at the top who had the power werenât going to take responsibility. So they ignored him. And in Wales, people shrugged.

For example, Wales Online said it was âgood newsâ that Tesco was to encourage Welsh customers to donate to food banks at Christmas1 â no hint of irony, nothing suggesting the need for food banks was in itself bad news.

A well-informed debate2 in the Senedd on the UN report was barely reported. Charities continued providing evidence of how their clients are being hit by cuts to public spending and by welfare reforms, but are finding it harder to engage the media in the debate3.

Itâs ten years since the great crash of 2008 when bankersâ greed sent a tsunami of pain from the US across the world. It led the British coalition government of the time to decide that austerity was the way forward. But have we become so familiar with stories of the hardship that inevitably resulted that weâre immune to them? Are those of us outside the walls of the poverty trap just a little bit smug?

Wales experienced a sharp rise in unemployment in the four years after the crash. Yet since about mid-2012 unemployment has fallen and now stands at a little over four percent. More people are in work than at any time since 1975.

But Philip Alston underscores the truism that having more people in work is not enough. Employment had not proven to be an automatic route out of poverty in Wales, he said after coming here during his visit around Britain.

The Joseph Rowntree Foundation said that after the crash and until 2010/11, there was a âbig fall in income from earnings across societyâ â though low-income working families then had some protection because the value of tax credits and benefits was maintained. But from then on the child poverty rate in particular and the number of children in poverty in working families have risen more steeply than at any time in the last twenty years. Part-time, low-paid and precarious work now affects swathes of society.

However you donât need statistics to tell you that people are struggling: juggling jobs; waiting on the benefits payment; spending a greater part of their lives as carers; waiting longer in A&E living longer in sub-standard rented homes, unable to buy; driving crummy cars knackered by deepening potholes. Services fundamental to communities like libraries and leisure centres and shops are closing. Ask your kids. Ask your mother.

You know poverty when you see it. But much is hidden. And when it comes to quantifying, it depends who you ask.

Alston used a measure of ârelative povertyâ â the percentage of people living with less than 55% of the median income, taking into account costs such as childcare, housing, debt and disability. The Westminster government uses a measure of âabsolute povertyâ, counting people in households with less than 60% of the median income as it was in 2010/11. And the government says there are a million fewer people in absolute poverty than there were in 2010.

The Rowntree report agrees that the percentage of people in Wales living in poverty is slightly lower than it was more than 20 years ago, but it remains the highest in the UK. And still 185,000 Welsh children, 405,000 working-age adults and 120,000 pensioners are living below the poverty line.

The Westminster government has devolved much of the responsibility for facing the public with these tough decisions either to the national governments in Wales, Scotland and Northern Ireland or to local government everywhere.

The Welsh Government has taken what some call a holistic approach to tackling poverty, focusing on increasing economic prosperity and employment overall as the route to improving the situation. But there are worries â not least from the Assemblyâs own Equality, Local Government and Communities Committee. It wants a clear strategy for tackling poverty to âhelp provide clear direction and to help the Assembly scrutinise the Governmentâs approachâ. It says the Welsh Government should publish targets for reducing poverty, a call backed by Alston.

He was shown evidence of how it is anticipated that benefit changes â and particularly Universal Credit â could hit poverty-hit households too. And unlike Scotland, Wales canât do anything about that (though thereâs an on-going debate4 about the effectiveness of counter-measures available to the Scottish Government).

The Equality and Human Rights Commission regularly asks âIs Wales fairer?â in its âstate-of-the-nationâ report. Its latest view on âthe state of equality and human rights 2018â welcomed some progress â fewer youngsters not in education or employment or training, more people in work, more women voting, some improvements in treating mental health5.

But it warned of more evident divisions in society: âa rise in poverty that is leading to an even starker gap between the experiences and opportunities of different people, particularly people born into poverty, disabled people, and some ethnic minority groups in Wales. All of this is set in a context of long-term reductions in public spending, divisions in society and ongoing uncertainty about the impact of leaving the European Union, which is likely to have a particular impact in Wales.â

So from the pictures taken ten years ago of broken, jobless bankers carrying their belongings home in cardboard boxes, weâre now used to startling shots of the working poor carrying home their kidsâ meals in bags from food banks to the point of complacency.

As he slips behind the First Ministerâs desk at Cardiff Bay, Mark Drakeford says easing poverty and making Wales fairer is a top priority. Wales needs a coherent and radical vision if it is to stop topping all the wrong economic charts after a decade of mopping up the bankersâ mess and trying to alleviate the effects of austerity which followed.

Steve Groves is a Cardiff-based journalist and radio producer.

Mick Antoniw AM draws on his family background as part of the Ukrainian refugee community, and his experience on the EUâs Committee of the Regions, to detail how Wales could build on its historic relationship with Ukraine, from coalfield solidarity to language planning, and learn from other non-EU member nations further east how Wales could forge an alternative set of relationships with the EU after Brexit.

Poet Sophie McKeand describes what prompted her to sell her possessions and head to the continent in a van. She discusses with fellow left-wing libertarian Plaid Cymru Police Commissioner Arfon Jones what this philosophy could mean in the context of drug reform, detailing the practicalities of decriminalisation and regulation of illegal substances, and how this could reduce the suffering caused by the âwar on drugsâ.

Charlotte Williams gives an in-depth study of myriad forms of Black writing in Wales, arguing that recognising Black Welsh writing is an expression of cultural democracy that expands the boundaries of the national imagination, in ways which can benefit everyone.

This is the twenty-eighth contribution to our Welsh Keywords series â inspired by Raymond Williamsâ Keywords â which offers contemporary perspectives on contested meanings of words in Welsh and how these shifting meanings continue to shape our society.