In the lead up to the General Election, poet Patrick Jones gives the case for why independence for Wales is the only way out of our current malaise of austerity, hopelessness and xenophobia, and celebrates the people and historical movements that have inspired his stance. 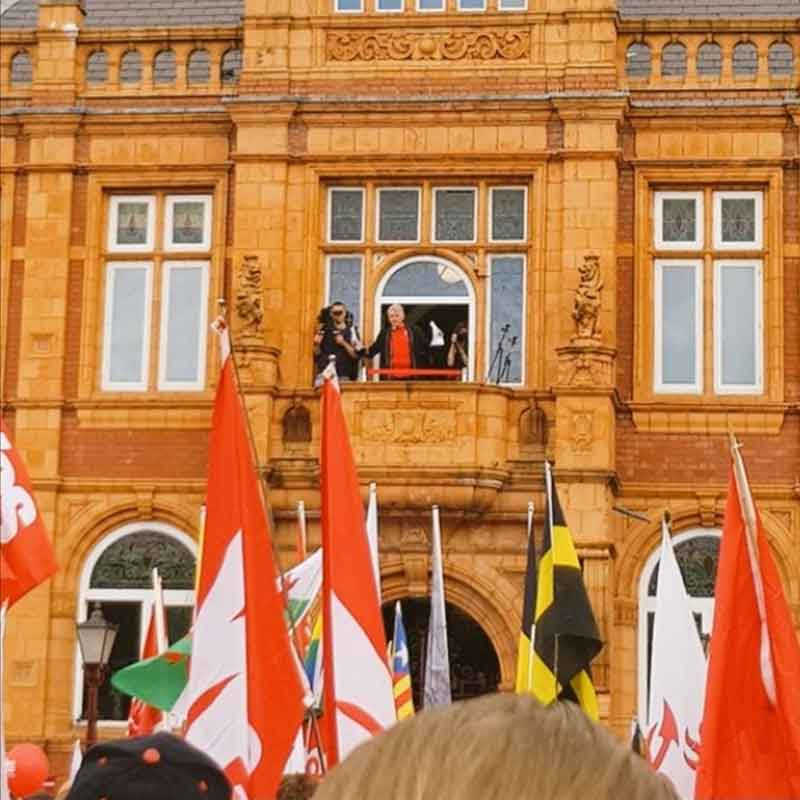 Patrick Jones speaking at the 2019 All Under One Banner march in Merthyr Tydfil.

âThe Welsh language is a vast drawback to Wales and a manifold barrier to the moral progress and commercial prosperity of the peopleâ
The âBlue Booksâ:The Report of the Commissioners of Inquiry into the State of Education in Wales, 1847

âThe Welsh language is a maypole around which a bunch of hotheads can get all nationalistic.â
Jeremy Clarkson, 2011

Wales is used to being attacked.

You only have to look at how Westminster is treating those who they rule to realise something has to change: zero hour contracts, the rising level of homelessness, foodbanks deemed âgood for communal spiritâ by politicians, punishing people (many of whom are in work) through benefit delays and sanctions for struggling and falling off the edge of society Ì¶ a reality so common that barely anyone blinks an eye. Then of course there is Brexitâ¦ I could go on. Furthermore, Westminster austerity also leads to cuts to devolved areas such as the NHS, housing provision, education, community centres and libraries due to reductions in the block grant to the Welsh Government, and a grossly unfair Barnett funding formula that disadvantages Wales. On top of this, the fact that Welsh Labour as a unionist party is so wedded to the neoliberal orthodoxy of the British state means that devolved government in Wales colludes with the austerity regime at Westminster. Only in the past week Labour joined with the Tories in the Senedd to block a law that would give the Senedd a veto over international trade deals that could open the NHS up to privatisation.

My point is that it is time we looked to ourselves to create the sort of society we want: a society based on mutuality, collaboration, connection, representation, tolerance, inclusivity, sustainability and hope. This isnât an idealistic vision. It is based on practical considerations: we have the natural resources, we have the strength of spirit, and with these we potentially have an infrastructure upon which to build good jobs, good homes, better lives.

Furthermore, look at our heritage and history. The Minersâ Institutes, the libraries, the medical aid societies, the Chartists, the Merched Beca, the Scotch Cattle, the Merthyr and Newport Risings, the Suffragettes, those who went to fight against fascism in the Spanish Civil War, the women of Greenham Common, the striking miners in 1984-5 and the womenâs groups of the Minersâ Strike, Cymdeithas yr Iaith Gymraegâ¦

In the present day, look how the vandalism of the Cofiwch Dryweryn monument galvanised a new generation of activists and thinkers. Look at our poets, writers, actors, boxers, athletes, thinkers, musicians and politicians. Look at how third sector agencies like Llamau and Alzheimerâs Society Cymru campaign for social justice. Look at Yes Cymru, Undod, Wales Football Fans for Independence and a more modern, inclusive Plaid Cymru. Things are changing. There is an appetite for reconstruction.

Look how we have welcomed people from all over the world and how communities speak up for those refugees told to âgo homeâ, and how we value so much all they have given this tiny, massive land. This is their home.

We are a culture not prepared to sit down and simply take it. It is time we stood up again and faced the enemy without fear. We now see an emphatically internationalist nationalism, something I sensed in September 2019 when I joined the All Under One Banner march for independence in Merthyr. Here I read a poem entitled âTrawsblaniad Enaid/Soul Transplantâ about welcoming Syrian refugees into this land, headed by a bigoted quote by David TC Davies, MP for Monmouth. It was greeted with applause and unity of purpose. Now, can you imagine this sentiment at an English Nationalist march? It ends:

AND IF THEY TRY TO BURY US
WE SHALL DIG DEEP
CLING TO OUR PAST
SPROUT ROOTS
AND FROM THE LIVED PRESENT
INVENT OUR FUTURE
YOURS AND MINE
COME,
LET US CULTIVATE OAK AND OLIVE TREES
SIDE BY SIDE
OCHR YN OCHR
YMLAEN.

I see a correlation with Allendeâs Chile in the early Í 70âs where culture, social justice and politics fused to remake society. A society that frightened the US so much the CIA participated in its destruction and the installation of General Pinochet. What would Trump make of the progressive society so many of us are trying to forgeâ¦?

We can learn from our tragic, yet glorious past and with hard work instigate a positive, shining future. A future where no one is homeless. Where everyone has a meaningful, life-supporting job. Where everyone has access to a dentist and a doctor. Where aspiration is not limited by postcode. Where everyone has the chance to learn and speak Welsh. Where everyone will be cared for and supported in old age. Where everyone, no matter their age, gender, class, colour, religion, disability, race, ethnicity or sexual orientation has equal opportunities. This is my Wales. And Johnson, Clarkson and Farage can fuck off from it. Gather around the maypole I say, and dance, dance.

âNow, thereâs a small corner of Wales that will forever be Cameroon, and vice versa.â
Eric Ngalle Charles

Patrick Jones is a playwright and poet. He has recently published My Bright Shadow with Rough Trade Books and released Renegade Psalms Ì¶ a spoken-word album with John Robb. Heâs currently adapting his 2016 play Before I Leave into a film and is writer-in-residence with The Royal College of Psychiatrists in Wales. He is slowly but surely learning Welsh.

A short story by Francesca Rhydderch