On the 23rd of June 2018, The Josef Herman Art Foundation Cymru, in partnership with The Royal Cambrian Academy and The Welfare Ystradgynlais presented the all-day event âCelebrating Refugeesâ. The programme was moving and diverse, including short films by Syrians living in Ystradgynlais and a tour of Josef Hermanâs archive. We were especially privileged to witness and film this interview, where art historian Paul Joyner was in conversation with artist Karel Lek, who at nearly 90 recounted the story of how he and his Jewish family fled the Nazis before arriving in north Wales. He gives a now rare insight into what it was like to be a wartime refugee here, before going on to describe his experiences as an artist. Lek has for many decades documented everyday life in Bangor and beyond with extraordinary empathy, and the conversation is interrupted now and again where he creates a live charcoal drawing to illustrate a character or anecdote (and also for a flying re-enactmentâ¦).

Watch the film below for a powerful and often humorous expression of âWelsh internationalismâ. With thanks to The Welfare, Ystradgynlais for their hospitality, and to The Josef Herman Foundation and The Royal Cambrian Academy for organising the event.

Here are the drawings created in the course of the conversation. Artwork Â© Karel Lek, and images by Hywel Edwards. 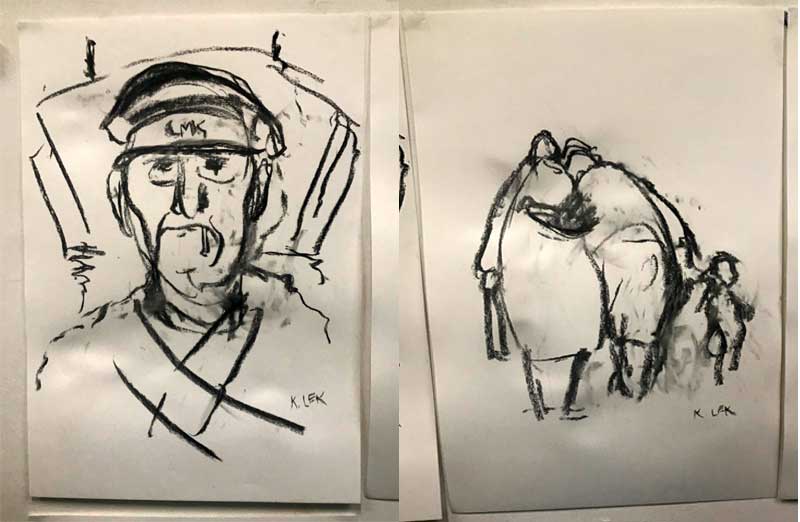 Paul Joyner in conversation with Karel Lek at The Welfare, Ystradgynlais

You can find out more about whatâs on at The Welfare, Ystradgynlais here www.thewelfare.co.uk, and the work of The Royal Cambrian Academy and The Josef Herman Foundation here http://rcaconwy.org/ and here http://josefhermanfoundation.org/

If you appreciated this feature, you can enjoy in-depth material on a wide range of topics in Planet magazine, and you can buy Planet here.

Frances Williams evokes contrasting atmospheres in two Bangor cafÃ©s across the road from each other, and how this kindles ideas about Welshness, womanhood, culture and resistance, drawing on Raymond Williams, Pierre Bourdieu and memories of her grandmotherâs mischievousness.