Miriam Elin Jones reports from the 2018 Haciaith âunconferenceâ,
introducing exciting new online projects to help us all enable the Welsh language to flourish. She draws on her interest in Welsh futurism to make the case that technology and coding are as important as the arts for safeguarding and reinventing Welsh culture in the years to come.

Traditionally, technology is often feared rather than celebrated in science fiction. Welsh-language sci-fi especially, most notably Y Dydd Olaf by Owain Owain, portrays the frighteningly real possibilities of deteriorating communities and language death, and authors often forewarn of the damaging effects of modern technology on culture and language. However, with technology now part and parcel of everyday life â I assume youâre sat reading this article on whatever thingamabob you have at hand â Wales and Welsh-language speakers must perhaps envisage a different future.

Cymruddyfodoliaeth (Cambrofuturism) is a blog and Twitter account, sparked by an original article by Rhodri ap Dyfrig, creating an online exhibition of art, music, literature, architecture and more which portray future Wales. One of my personal favourites among the work displayed with pride as Welsh futurism, is artist Hefin Jonesâ Welsh Space Campaign and Cosmic Colliery. His work reinvents âtraditionally Welshâ artefacts and landmarks, offering them an opportunity to flourish anew in a different context. It is with this strong dose of ambition in mind that I head to Hacioâr Iaith (Hacking the Language) conference in Tramshed Tech in Cardiff, at the tail end of January this year.

The eighth annual Hacioâr Iaith (shortened to Haciaith) is an âunconferenceâ which offers the opportunity to discuss promoting the Welsh language through digital media and promoting digital media through the Welsh language. The very nature of the âunconferenceâ is, naturally, sporadic, with the timetable partially (if not mostly) a blank canvas for attendees to offer ad-hoc presentations or continue with discussions. 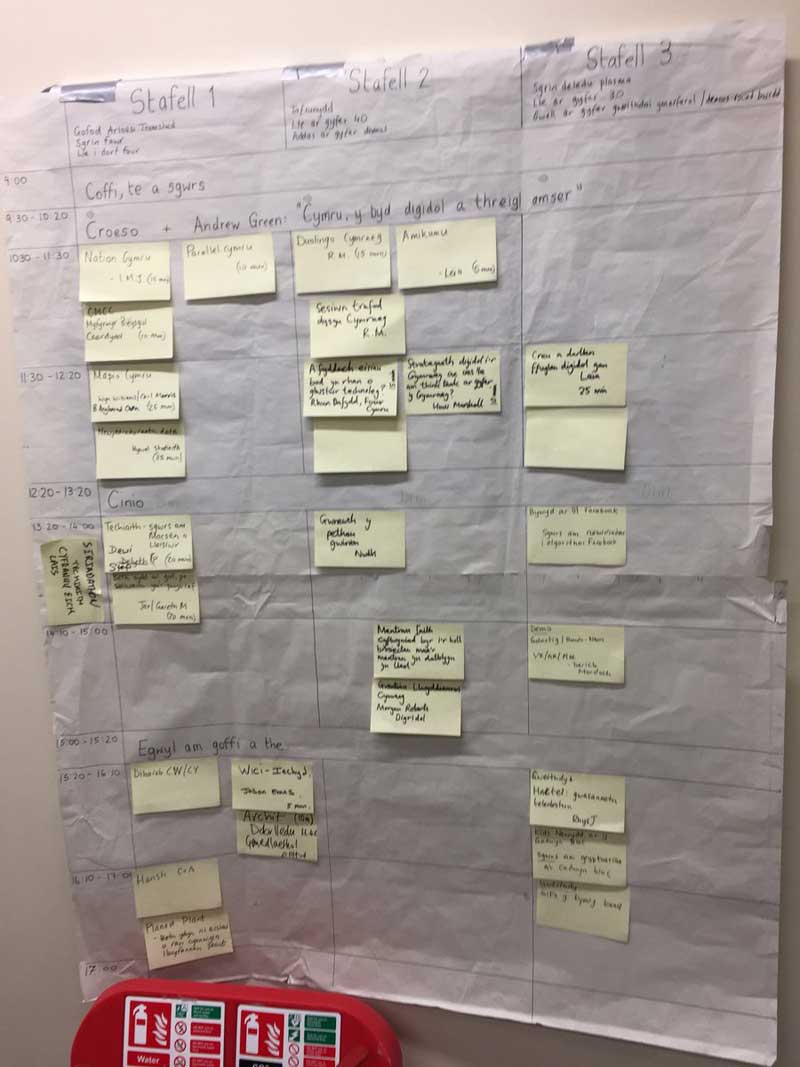 The only strictly scheduled event is Andrew Greenâs keynote at the very beginning of the day. Reflecting on his previous role as a librarian and how academic libraries were at the forefront of digital innovation, he calls for a system like Norwayâs Bokhylla (Book Shelf) to be implemented to digitise and secure open access to all Welsh-language texts. Of course, problems lie with funding and copyright issues, and as an audience member mentioned, how do the rural communities access this imagined bank of books when broadband speeds are still appallingly slow? An obstacle optimistic visions of Wales as a technological pioneer so often fail to consider.

With the Welsh Governmentâs bold target of one million Welsh speakers by 2050, resources for learners and new technologies to encourage the use of the language appeared to be at the crux of many discussions at Haciaith. (Although perhaps, it could be argued that displaying these developments was a fruitless endeavour at a Welsh-language conferenceâ¦) Apps such as Duolingo and Say Something in Welsh were presented, with Learn Cymraeg GO also discussed at a later point in the day. Parallel.cymru, an online magazine, with different sections for various levels of language proficiency, founded and run by Neil Rowlands, offers a parallel reading experience, a norm in many other languages, but innovative in Welsh. This was also one of the simpler but more exciting developments of the day.

Also as part of the 2050 pledge, Mentrau Iaith (Language Enterprises) have secured grants to develop various digital projects, including an app of Welsh nursery rhymes for children and parents, Welsh-medium coding clubs, and Menter Caerphilly in particular presented the development of various YouTube channels - Teganau (Toys), Chwarae Gemau (Playing Games), Gemau Retro (Retro Games) and Yn Chwarae (Am Playing). All are aimed at different age groups, with the sole purpose of filling a gap in the market, producing content to promote the use of the Welsh-language outside a classroom. Many discussions in Haciaith quashed the dystopian fears redolent of traditional Welsh science fiction. With the younger generation now born and raised into a world where a voice-controlled virtual assistant such as the Amazon Echo has become a central part of a family home, there is a constant need to create relevant online content through the medium of Welsh. 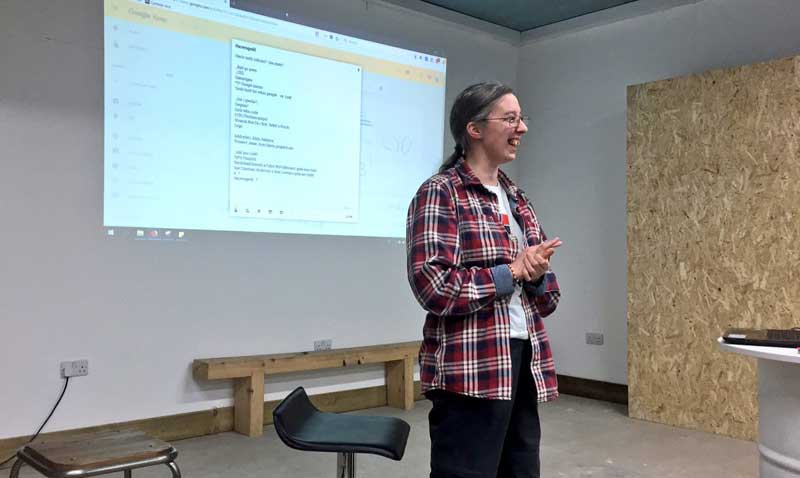 However, anxieties about the direction of online media were also discussed, with Gruff Pritchard from BBC Cymru Fyw airing concerns regarding the new changes in Facebookâs news feed algorithm. Does adapting the news feed in order to prioritise âpersonalâ stories â updates from family and friends â leave smaller publishers and businesses running Facebook pages to be ignored and forgotten? Is it time that minority-language content secures its own platform, rather than depending on other social media?

Despite this apprehensiveness about certain dynamics within the global digital sphere, sharing positive experiences, knowledge and ideas appear to be the crux of the Haciaith experience. Eight yearly âunconferencesâ has nurtured a lively and important community. Would a stricter framework to the day work better? Possibly. However, Haciaith appears to be more than a conference; it has grown into an active collective. The Haciaith hashtag on Twitter following the event has seen multiple ideas grow into blogs, discussions, events and the Haciaith podcast by Sioned Mills, Iestyn Lloyd and Bryn Salisbury brings a concise round-up of the entire day. 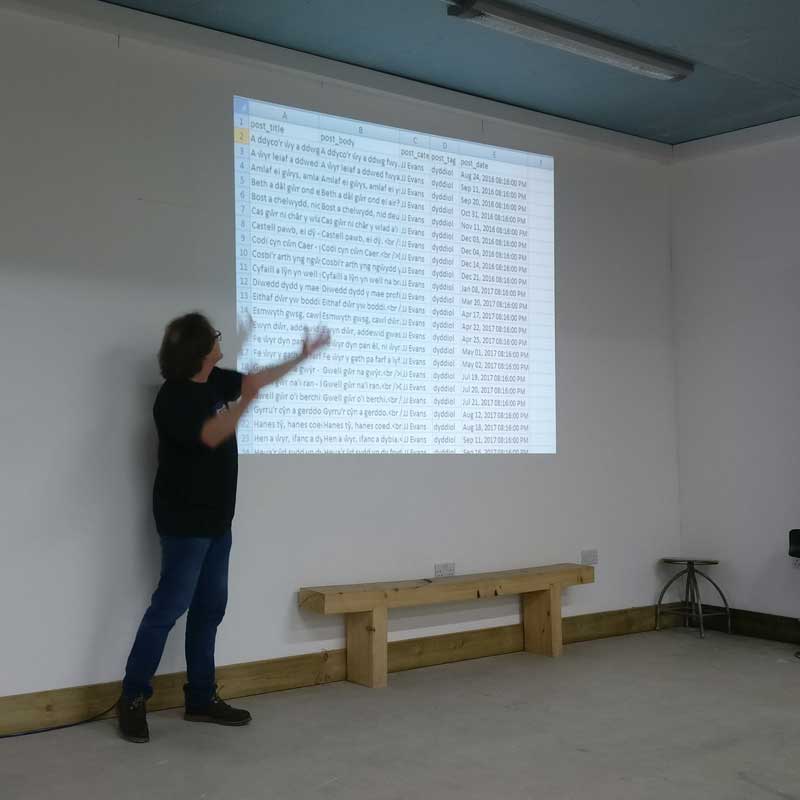 Without a doubt, a hefty dose of ambition and enthusiasm is needed to foresee an inventive, technologically rich future Wales. As we return to consider the Cymruddyfodol blog, and its cultural vision for Welsh futurism, should we not add coding to the artistic skills needed to strengthen and protect Welsh culture? .

Miriam Elin Jones is a writer, blogger and researcher from west Wales, currently researching the development of Welsh-language science fiction in the Welsh and Celtic Studies Department at Aberystwyth University. http://miriamelinjones.cymru