Hywel Dix is Lecturer in English Communication at Bournemouth University.

If you liked this you may like:
A review of Jeptha by Hywel Dix
Carl Lavery's review of The Persians
Alan M. Kent on Cornish theatre and devolution in Planet 207

For an English-language audience, Parry is perhaps best known as the writer of the cult 1978 film Grand Slam. In it, a group of Welsh rugby fans travel to France for the final game of that season. Those same fans would have found Paris in 2013 a happy hunting ground, but the work of Parry himself has moved on to a new audience – at London’s Finborough Theatre – for the English premiere of his drama.

Whatever – if anything – the Finborough audience might have known of Parry’s work in advance, the production can’t fail to have come as a revelation. For an audience who might mainly know Parry as the writer of Grand Slam, the taut prose and claustrophobic atmosphere of Saer Doliau must have felt like the work of an entirely different dramatist. To an audience whose knowledge of Parry’s work extends no further than his role in creating Pobl y Cwm, the stark existential angst of Saer Doliau must have seemed like it was from an entirely different planet.

Evans/Ifans, the doll mender of the title leads a confined existence, measuring out his life from one day to the next surrounded only by the company of his dolls. His insular world view and small-minded attitude to outsiders is expressed through his refusal to repair black dolls. The play’s exposure of prejudice and narrow mindedness makes for highly uncomfortable viewing in the intimate atmosphere of the tiny Finborough Theatre, where no viewer is ever more than a few metres from the cast. To manufacture even the possibility of the audience sympathising with the unsympathetic Evans places considerable demands on both dramatist and actors – who in the main respond well. 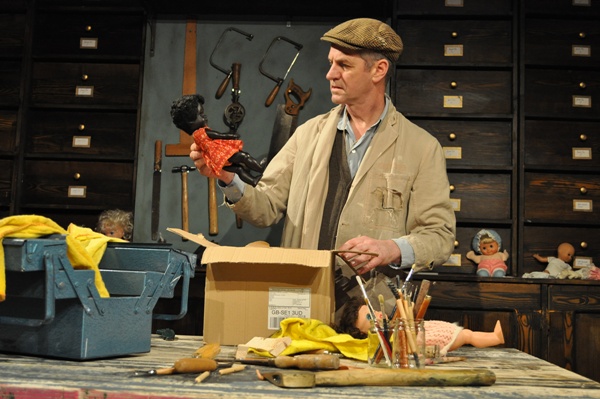 The first hint of menace comes in the form of a telephone, the only means by which Evans is able to communicate with a world beyond his workshop. Snatches of conversations with a mysterious ‘boss’ frequently invoke an even more mysterious ‘him’ – an unnamed person or creature believed to be lurking in the cellar below the workshop. Consciously departing from conventional theatrical realism, Parry uses the idea of the absent boss to elevate Evans’s vocation as a doll mender to the status of a wider symbol of life and art. The audience does not question the highly unlikely set of relationships that are presented; neither are they intended to. They are more likely to be drawn into the atmosphere of entrapment and paralysis that Evans must struggle against.

This basic struggle between continuing to live and wanting to break free from entrapment is given a further twist by the appearance of the play’s third figure of mystery, the nameless woman. Her arrival and that of a youth accompanying her catapults Evans into a new series of crises. Once again, rather than inviting the audience to question the consciously absurd nature of the unfolding relationships, the play presents the conflict for control of the workshop as an extended conflict for power and dominance. Evans’s refusal to open the cellar for fear of unleashing the beast below is matched by the woman’s equal and more assertive insistence that it be opened.

From this point the play becomes more philosophical, more akin to the works of Pinter and Beckett. Just as Beckett’s Waiting for Godot represents the systems of dominance and control that exist during the wait for an unknown future, so too Parry’s Evans puts to the audience all sorts of troubling questions. What, precisely, is he afraid of? To what extent is he a prisoner of his own fear, or even defined by it? To what extent does he need that fear in order to justify his existence, and to what extent would the opening of the cellar undermine that same existence? 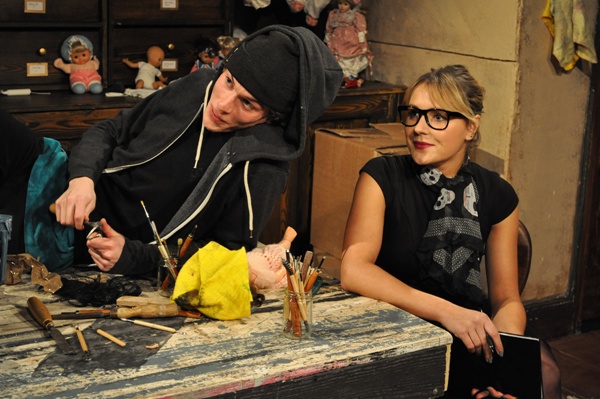 Seiriol Tomos is a successful Evans, capable of making the uneasy transition from the unsympathetic to the tormented. Catherine Ayers is utterly tormenting as the woman – at times a powerful dominatrix and at times the sneering voice of modernity, in contrast to Evans's superstitious ways. Steffan Donnelly as the youth brings a level of implied physical danger to Evans’s world that complements Ayers’s psychological menace. If the play has a minor weakness it is that two or three consecutive scenes take the form of a repetitive angry confrontation between Tomos and Donnelly, into which Ayers is repeatedly compelled to intervene. But nevertheless this is serious, powerful and challenging drama. By the end of the action, Evans’s world view has been blown apart.

We feature many further reviews and analysis of cultural performances and events in the magazine also. See our contents pages in the archives section and you can buy issues here.