Tony Brown is Professor of English at Bangor University


If you liked this you may like:
Hywel Dix reviews Welsh National Opera's Tudor-themed productions of Maria Stuarda and Anna Bolena
In Planet 179, Byron Rogers writes on his experience of putting together R.S. Thomas's biography - buy the issue here
Holly Howitt writes on the 'Brief Story of Microfiction'
Tweet Follow @Planet_TWI

A Few Thoughts on an R.S. Thomas Year

Tony Brown looks back at the centenary year of the poet R.S. Thomas

20.12.13
At various points this year, attending numerous celebratory events, I found myself wondering what R.S. would have made of it all. I'd like to think that on the whole he would have approved. There was usually a minimum of formality â and no corporate logos and official sponsors. All done on a variety of shoestrings really, albeit held together by some excellent publicity from Literature Wales’s website. I am not sure what R.S. would have made of the idea of a celebration in a cathedral; cathedrals were not really his thing. But the morning in Bangor Cathedral turned out to be a genuinely moving experience, woven through with some of his finest religious poetry and with a beautifully-judged and thoughtful talk on R.S.'s religious ideas by Archbishop Barry Morgan, who had known R.S. well, of course. When the rain beat in at the windows during the service, I remembered that blue tit which pecked aggressively at the window at the memorial celebration some years ago at Portmeirion; but as the service ended and the great doors opened the cathedral was filled with sudden sunlight.

I think R.S. would have been struck, perhaps indeed surprised, by the warmth of memories expressed in the little churches where he once served. I rather felt his bemused presence on our literary ‘pedestrian tour’ through the fields at Manafon in the pouring rain, before we gathered, dripping, in the church. Manafon and Eglwys-fach especially yielded some stories to treasure, usually from former members of his congregations. We have heard about his coaching rugby, but R.S. teaching ballroom dancing in the youth club at Manafon?! (This was related to me by a lady who had been a member of the club.) I was told in authoritative tones that the story about R.S. burning his cassock on the beach at Aberdaron after his retirement was, as I have always assumed, entirely fictitious: 'He really burned it in his back garden!' Also fictitious? A few weeks later, at Eglwys-fach, there in a little exhibition at the back of the church, on the sort of mannequin used in shop window displays, was 'R.S. Thomas's cassock', including, as was pointed out to me, his pocket-handkerchief. Presumably, this was just the one he wore at an earlier phase of his career. But, as I gave my talk at the front of the church, every time I looked up, there, unnervingly, at the back, was the dark, silent presence of this cassock-clad figure. 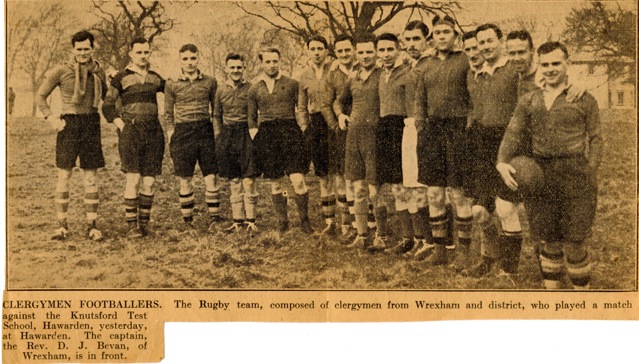 RS is on the far left in the rugby team, courtesy of the R.S. Thomas Research Centre, Bangor

There were more formal occasions, of course: Wynn Thomas on 'R.S. Thomas and Yr Hen Fam' at Bangor, at the opening of the large R.S. Thomas Centre exhibition; a talk at the Hay Festival in the (appreciative) presence of the former First Minister of Wales; a missionary event at the British Academy in London, addressed by (Lord) Grey Gowrie, former Arts Minister and also a poet; and at the end of the year Rowan Williams discussing R.S.’s awareness of Buddhism, to an audience which was at least as big as the one R.S. had in the same room in 2000 at what turned out to be his last public reading.

So it has been a rich and various year: appropriately so for one of our most complex literary figures. A year of memories, marvellous poetry, and some new light on the writing itself. Indeed while much of it will survive only as memories, there are some more lasting products: new editions of R.S.'s own work, some fine critical writing and, perhaps my favourite, Cofio R.S.: Cleniach yn Gymraeg? ('Remembering R.S.: Kinder in Welsh', Gwasg y Bwthyn), a series of recollections of the man himself by those who knew him personally, often over many years, all illustrated by some striking previously unpublished pictures of R.S..

My own most anxious moments? Having a room full of people in the art gallery at Plas Glyn-y-Weddw, staring expectantly at me and a blank screen, awaiting the appearance, via Skype, of the poet’s son, Gwydion, for a 'conversation'. Finally the technology stirred into life and memories of R.S. reached from Thailand to Pwllheli. In fact the main focus of attention on that occasion was not so much R.S. himself as Elsi Eldridge, his wife of some fifty years. It was part of a fine exhibition of her extraordinary work; this was followed by a recent exhibition at Oswestry and there is more to come. Of this I am fairly confident that R.S., the author of those wonderful late poems and elegies to his wife, would have approved. 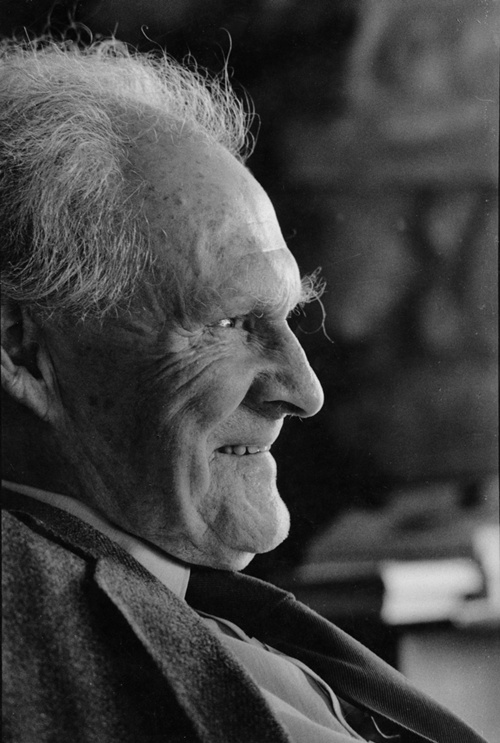